News: this competition-winning design by SURE Architecture envisions a futuristic skyscraper that could house an entire city – with its own ecosystem and a spiralling form that could be extended infinitely upwards.

Known as the Endless City, the conceptual 300-metre skyscraper is imagined as a vertical city that would extend London's existing neighbourhoods up into the sky, thanks to a pair of interwoven ramps that wind up around the perimeter of the building.

SURE Architecture, a Chinese firm with an office in London, drew up the design for the SuperSkyScrapers Awards, a competition seeking an "inspirational typology for a high-quality organic skyscraper concept to be used as a tech city". 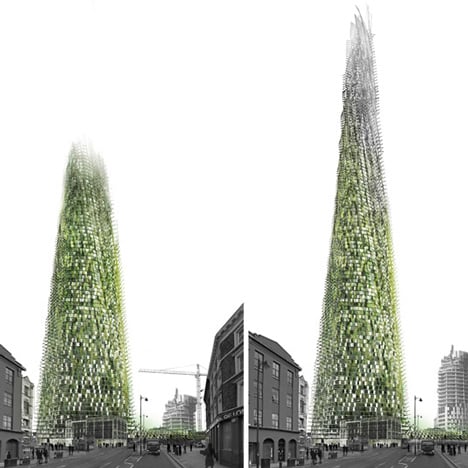 Organic Skyscraper by Chartier-Corbasson would be built from office rubbish

According to the designers, the building could accommodate residential communities, businesses, schools and shopping areas, and even "huge parks" and public plazas.

"London's streets can now be developed both horizontally and vertically in a continuous way," explained the team in their competition entry. "There is no break anymore, neither between the street level and the skyscraper, nor between the skyscraper floors themselves."

"Rather than superimposing one floor on top of another without real continuity, our project is thought of as two endless ramps circumrotating continually and rising gradually with a low gradient from the ground floor to the sky."

The two ramps winding up around the exterior – linked intermittently with bridges – would be supported by six huge steel tubes, which would also enclose the staircases and lifts used to transport people, energy, waste and water up and down the building.

These tubes could also be used for lifting structural elements to the top of the 300-metre structure, allowing the skyscraper to be made ever taller.

"The London Skyline, and this organic skyscraper as a part of it, will transform, evolve and grow continuously together," said the architects.

The building is also designed to maximise passive energy use, with minimal reliance on artificial lighting and mechanical ventilation.