Described by architects Mauricio Pezo and Sofia von Ellrichshausen as a "monolithic prism of concrete", this top-heavy house nestles into the hillside beside a Chilean lagoon (+ slideshow).

The two-storey Casa Guna was designed by Pezo von Ellrichshausen for a rural site in San Pedro de la Paz, central Chile, where it sits between the lagoon and a wood of eucalyptus trees. 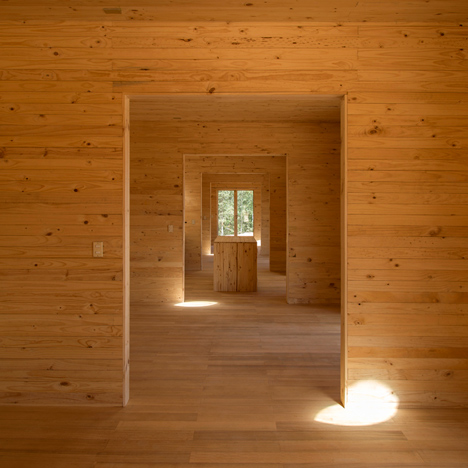 Aiming to put most of the house's living spaces on one level, the architects designed a bulky concrete building where a compact lower level supports a much larger upper storey, with rooms that open out to a central courtyard.

The roof of the lower storey becomes the courtyard for the upper level, meaning none of the house's rooms sit on top of one another.

The northern corner of the lower level has also been cut back, creating a stepped route down from the courtyard to the lagoon.

Wooden formwork was used during the concrete casting to give the walls of the building a coarse stripy texture and a dark patina.

"As in Matila Ghyka's description of a landscape as a 'crystallisation of a conflict of forces', the entire structure is a stony mass in apparent repose," added the architects, referencing the work of a Romanian novelist.

A grid of four rooms on the lower level house the most day-to-day activities. They include a utility room and a family dining area.

A spiral staircase at the southern end of the plan leads up to the floor above, although the addition of glass doors at several points around the building allows residents to also move between rooms and floors via the courtyard and patios.

Rooms on this upper level are arranged in a loop, connected by a corridor that runs around the perimeter of the courtyard.

"This upper floor, a dogmatic piano nobile that compensates for the inconvenience of the diagonally set natural terrain slope, is based on a grid of four modules per side," said Pezo and Von Ellrichshausen.

All rooms open out to the exterior, and middle rooms also feature windows facing the courtyard.

Every room in the house features a square skylight in the centre of its ceiling. Some also include glazed sections of floor, helping to bring in daylight from all directions.