The Musée des Confluences, which opened to the public just before Christmas, was designed by Coop Himmelb(l)au to accommodate the museum's collection of over 2.2 million objects, alongside exhibition galleries and lecture rooms. 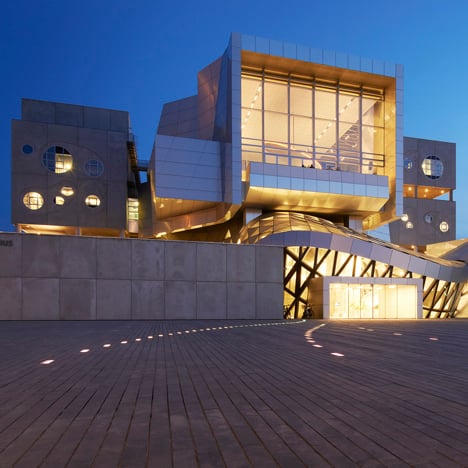 The resulting building comprises an assortment of irregular shapes and protruding elements, all elevated over a public plaza, while spaces inside are connected by a curving bridge-like structure.

Sitting on a man-made peninsula at the confluence of the Rhône and Saône rivers, an area that has undergone extensive development since the 1990s, the museum's form was a response to the desire to maintain pedestrian movement across the site.

"Even though it was apparent that this site would be a difficult one – 536-metre-long piles had to be securely driven into the ground – it was clear that this location would be very important for the urban design," said a statement from Coop Himmelb(l)au.

"The building should serve as a distinctive beacon and entrance for the visitors approaching from the south, as well as a starting point for urban development."

The team developed a structure made up of three main parts, known as The Crystal, The Cloud and The Plinth. This divides up the exhibition spaces, the public entrance foyer and the auditoriums and workspaces.

"In order to build a museum of knowledge, a complex new form had to be developed as an iconic gateway. A building that truly stands out can only come into being through shapes resulting from new geometries," added the design team.

Named after its crystalline glass structure, The Crystal was designed to house the circulation spaces. A spiralling ramp leads up to a bridge pathway, offering access to the various exhibition spaces.

These galleries are contained within the steel-clad part of the building known as The Cloud, which Coop Himmelb(l)au describes as being like "an immense spaceship, stowed temporarily in present time and place".

Both of these sections sit above the reinforced concrete plinth, containing two auditoriums – seating 327 and 122 people, respectively – alongside a series of education workshops and technical spaces.

The public plaza sits directly beneath the elevated entrance hall. Here, a small pool is reflected on the underside of the building's reflective skin – made from stainless steel plates that were blasted with glass beads.

Coop Himmelb(l)au is led by architect Wolf D Prix. Other projects by the firm include the contorted steel Dalian International Conference Center in China and the Aalborg House of Music in Denmark.

Photography is by Duccio Malagamba.