Opinion: the UK is one of only three European countries failing to protect designers from intellectual property theft – damaging both their income and the reputation of their products, says Tony Ash, managing director for design brand Vitra.

When I joined Vitra, back in 1999, my predecessor gave me some advice: "Get over the fakes". Fifteen years later, I simply cannot get to grips with the fact that people are able to copy the products of designers such as Ray and Charles Eames, Ron Arad, George Nelson, BarberOsgerby, Verner Panton, Norman Foster, the Bouroullecs and Isamu Noguchi, manufactured by Vitra, without paying a penny to the designer, their heirs or the charitable foundations that have become the guardians of their work. It makes no sense.

Initially, it was Italian manufacturers who copied these products – primarily the popular models and best sellers such as the Eames Aluminium Group Chair and Eames Lounge Chair. However, having successfully challenged these rogue Italian manufacturers in court we ended up facing a newer, and far tougher, battle with Chinese manufacturers. 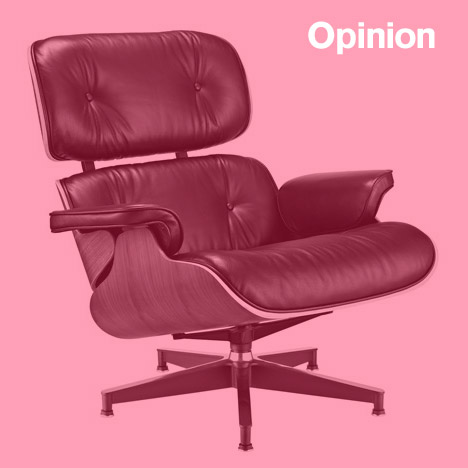 Over the last five to eight years we have seen huge amounts of unauthorised copies flooding the market from China and sold via myriad websites, lower end dealers, very famous supermarkets and even the odd design-led retailer who fancies that the margins on copies are greater than those on authorised originals, which they may well be.

The problem is a simple one. There are only three countries in the EU which do not adhere to EU Intellectual Property (IP) law. Romania, Estonia and... the UK. In France, as in the rest of the EU, furniture designs are protected for 70 years plus the life of the author. So, in the case of Ray Eames, who passed away in 1988, her designs are protected in EU countries until 2058. However, travel 22 miles over the channel to the UK and Ray's designs are protected for just 25 years. Thus the 1956 Eames Lounge Chair ran out of IP protection in 1981.

Copyists started using phrases like 'inspired by', 'reproduction' and 'in the style of'

For a number of years, Vitra's only defence was to have our lawyers ask the copyists not to use our registered trademarks and our photographs, of our own products, to promote their Chinese copies. Often this worked. Copyists started using phrases like "inspired by", "reproduction" and "in the style of" to describe their fakes. This helped, as did the poor quality of a great many of the fakes and the fact that lead-times were often very long and warranties non-existent.

However, we still faced stores such as Dwell offering identical 1:1 Chinese copies of Vitra Eames chairs – right next door to Heal's on Tottenham Court Road, who sold the authorised originals – quite legally and at a quarter of the price. A quarter of the price? Perhaps these copies are a good thing? Maybe Vitra is ripping off the consumer? Neither is the case, thankfully.

Of course, Vitra is a company like any other – we exist to make a profit. That said, our profits are not outrageous and part of that profit goes to the designer, or their heirs, in the form of a royalty, a fixed percentage of our selling price that compensates the designer for their work.

As for the cost, Vitra works closely with all of the designers, and their representatives, to manufacture their designs to not only the highest standard possible, some Vitra products come with a 30-year warranty, but to the quality levels originally envisaged by the designers. A copyist, by their very nature, exists to make products as cheaply as possible. In essence they are saying "let's try and make this worse than the designer intended".

Vitra is fortunate in one respect, as we have the resources and determination to fight for proper copyright protection. This is an industry-wide problem however, that impacts far more on smaller companies and designers who do not have these resources to take expensive legal proceedings against often quite well-funded copyists. It also does not take a genius to guess what might happen to the royalties for designers working for smaller furniture companies whose margins are being eroded.

Why should these designers bother working anymore if their designs aren't even going to be protected? And if the designers lose their motivation, then where will the firms get their talent from? The copyists are eating away at the very creativity of our industry, not just selling shoddy knock-offs of existing designs.

The British government has passed a law, the Enterprise and Regulatory Reform Act 2013, that seeks to address this problem. Yet it has also proposed – two years after the passage of this law – a far-too-long three-year transition period before the loophole is finally closed, as well as indefinite sell-through of existing stock. This will effectively create a five-year transition period that favours the copyists. The law that will protect the intellectual property of some of the world's most famous designers is on the statute book: it should now be bought into effect at the earliest opportunity.

Tony Ash is the managing director of Vitra in the UK, USA, India, Middle East and Far East.