Japanese furniture brand Kamarq has launched in New York with a collection of products that users can rent monthly, but pulled a design shortly afterwards amid plagiarism accusations.

Kamarq is a subscription-based furniture company that lets users rent its brightly hued items for a small monthly fee, akin to popular services like Netflix and Spotify.

It offers two packages, lasting 6 or 12 months, and ranging from $5 to $18 per month depending on the product. At the end of the period, customers can either hold onto their furniture or exchange it for a new design.

"By joining a monthly subscription service, users will be able to use Kamarq products for as long or as short as they please, giving them the flexibility to change furniture to fit their daily lifestyle in accordance with their own personal changes," said the brand.

However after the launch yesterday, the company announced it was pulling an item from its line, after comparisons were drawn between several designs and a series by New York designer Ana Kras.

The accusations made on social media, by users including fashion account Diet Prada in its story, highlighted similarities between the Kamarq furniture's simple flat surfaces set atop cylindrical bases, and Kras' Slon Tables created for US brand Matter Made in 2015.

The furniture range includes a series of dining and coffee tables, stools called Pillar, and a set of bookshelves and boxes named Kube. All are designed to be flexible and used in various ways, and available in a wide range of bright monochromatic options.

This week we debuted our inaugural collection and campaign with Japanese brand, Kamarq. Part of the collection was heavily inspired by the elegant long legs of Mario Bellini’s set of Il Colonnato tables from the 1970’s. We acknowledge that certain pieces could also be attributed to the work of designer Ana Kras for Matter, and out of respect for Ana & Matter, we will be removing these pieces from the collection. Kamarq is an ever-evolving brand that will strive to work with many different designers, and we remain respectful of and committed to supporting the creative community at large.

But after the plagiarism accusations emerged yesterday, Kamarq decided to pull the Pillar designs. The brand released a statement to explain the situation, which Mattan echoed on Instagram.

"Part of the collection was heavily inspired by the elegant long legs of Mario Bellini's set of II Colonnato tables from the 1970s," said the statement. "We acknowledge that certain pieces could also be attributed to the work of designer Ana Kras for Matter, and out of respect for Ana and Matter, we will be removing these pieces from the collection."

Mattan teamed up with Formichetti to help launch the Japanese furniture company, with each coming from different backgrounds. Mattan previously worked with former online design platforms Fab and Bazar, and more recently with Swedish furniture company Hem. Meanwhile, Formichetti has been involved with fashion brands like Diesel and Uniqlo, as well as his own label Nicopanda. 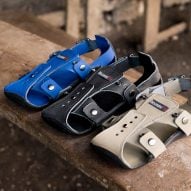 "The collection represents the duality of Formichetti's Japanese and Italian heritage and Mattan's playfulness, while referencing design classics from icons they love, like Mario Bellini, Gaetano Pesce, and the Memphis Group," said an earlier statement from the brand.

To help market Kamarq's first furniture line, the duo also created a technicolour photography campaign that presents the designs with assemblages of toys and flowers.

The designs are also set up in a similar format at a showroom New York's Soho for the launch, timed to coincide with the city's NYCxDesign festival. The space is located at 480 Broome Street and open to the public from 16 to 22 May 2018.

Photography is by Travis Chantar.