Corpo Atelier carried out the refurbishment on a dilapidated building in Sernancelhe, a municipality in northern Portugal, to create a family home. The project was named Wood Structure Inside Stone Walls. 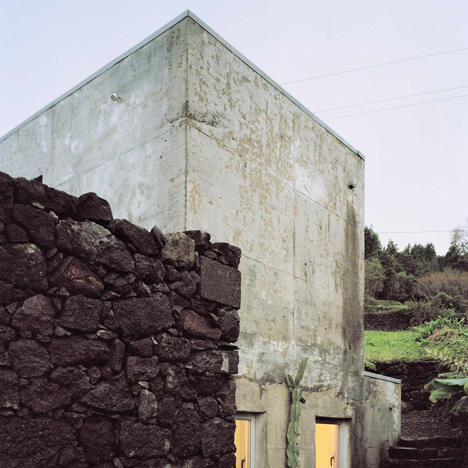 All that remained of the original building were four thick stone walls. The architects added a new wooden roof structure and a series of interior partitions, framed by chunky timber columns and beams.

They also increased the height of the upper storey by adding stone blocks to the existing walls, then repointed the whole building to harmonise the two different ages of masonry.

Wooden beams and trusses have been left exposed on the underside of the roof. They connect with a system of new floor beams and columns that subdivide the interior, create three mezzanine levels and frame a staircase with a cupboard beneath its treads.

"Inside, the wood structure that supports [the roof] is expanded vertically, trespassing the house in all its dimension, both dividing and 'hierarchising' the space," said the architects.

"The habitable areas then occupy the interstices of this clearly defined geometry of wood pillars and beams," they added.

The timber staircase sits in the centre of the plan. It leads up to a landing with a white railing that overlooks the open-plan living space on the ground floor. Doorways to the right and left lead off this platform into two double bedrooms.

The steps continue up from the landing to the family bathroom, where the roof beams fan out across the glossy white sloping ceiling.

Externally, the new roof is covered in terracotta tiles, as is a porch that provides the house's entrance. Irregularly shaped pieces of stone were also added around the perimeter, creating a patio between the building and the surrounding garden.