Rakhee Shobhit Design Associates has used shipping containers to create two residential units at either end of a farmland site in the Aravalli hills near Udaipur, India.

The Container House was commissioned as a countryside escape for the client and his family, who wanted to leave the city during the coronavirus pandemic to feel closer to nature.

Indian practice Rakhee Shobhit Design Associates (RSDA) responded by repurposing old shipping containers to quickly create a series of bright living spaces that would provide an "escape from reality" with minimal impact on the landscape.

"The Container House does not conform to conventional residential design ideas," said the practice.

"Instead, it employs industrial materials as the exoskeleton to create a homely, cosy setting with a spatial dialogue between the interiors and the surroundings."

"As an attempt to be mindful of resource consumption and ecology in a highly modernised world, this distinctive dwelling redefines consumption in real estate by being made up entirely of shipping containers," the studio added.

The Container House is comprised of two structures – named Champa and Chameli in tribute to the family's two dogs – which are positioned at opposite ends of the site to provide each with a sense of privacy.

Champa, the larger of the two units, was created for the client's mother using five containers of eight by 20 feet. The smaller Chameli was created by combining two containers measuring eight by 40 feet.

Both units were raised fifteen inches above the ground to mitigate the risk of flooding, and structurally reinforced and insulated in order to insert large areas of glazing. Their exteriors were finished in green to blend in with the surrounding landscape. 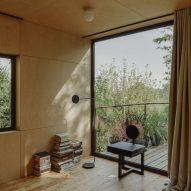 For the smaller Chameli unit, RSDA created a more open layout with a living area on one side and a bedroom and bathroom on the other, separated by a kitchen with a suspended fireplace.

The full-height windows in both units incorporate sliding doors, opening onto decked wooden terraces that are sheltered from sun and rain by woven bamboo roofs.

"A minimalist interior palette echoes the concept of modularity while being inviting and clean-lined," said the practice.

"Expansive glass walls framed with insulated aluminium open up the facade to accentuate the inside-outside connection and maximise the views."

Shipping containers are often used as a way of building quickly and economically.

Other recent projects making use of shipping containers include a portable home in Poland and an entertainment complex in Austin, Texas.