Children's bedrooms and play spaces take over the partially exposed subterranean floor of this house completed by Scandinavian firm CF Møller on the edge of a wood in Aarhus, Denmark (+ slideshow).

Named Villa R, the 300-square-metre family residence is made up of two square storeys. The upper floor, raised just above ground level, contains the main living spaces and master bedroom, freeing up the basement to be occupied by the clients' children.

CF Møller, whose projects vary from a wooden skyscraper to an art and craft museum, came up with the solution after being asked to design a house that is child friendly, but that also complies with the strict local planning regulations. 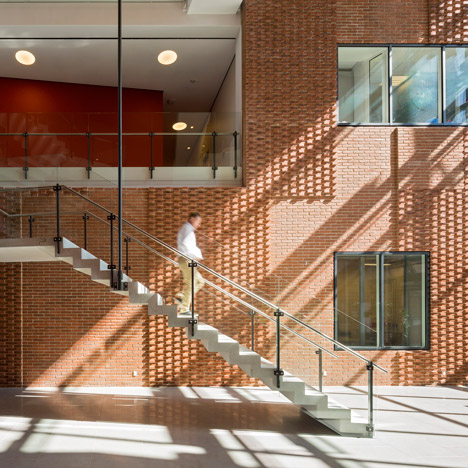 These regulations stated that the building could be no more than one storey high, but also that it could only take up 20 per cent of the site. In response, the architects added the sunken lower level, which they describe as the "parterre floor".

"The solution was a partially underground parterre floor which acts as the building's base, with children's rooms, playrooms and access to an outdoor patio," said the team.

"The upper part, covered with dark patinated zinc, is seemingly hovering above this base," they added.

The dark zinc panels cover the side walls of the building, as well as the projecting frame of the facade. But the north- and south-facing facades feature floor-to-ceiling glazing, offering views of the trees while also bringing in plenty of daylight.

"Inspired by the unique relation to the woods, the objective was to create a house that brings the forest inside through large glass panels and creates an ever-changing seasonal backdrop for the interior living spaces," added the team.

The house's main entrance is via a decked veranda at the front, which sits beside and partially shelters the sunken patio of the level below.

Inside, an open-plan living and dining space takes up over half of the floor. Featuring mostly monochrome furnishings, the room centres around a grand hearth that separates the kitchen space from the lounge.

The master en-suite bedroom is located in the north-east corner and there is also a small guest room tucked in the space behind the staircase.

A skylight throws natural light down through the stairwell, which descends to a playroom at the centre of the basement. Three bedrooms are organised around the perimeter, including two that open out to the patio.

Villa R sits at the rear of the site, as close to the trees as possible. This also allowed the architects to install a sheltered parking area at the front.

Photography is by Julian Weyer.