Designed to showcase Ford's advances in aerodynamics, lightweight materials and energy efficiency engine, the new Ford GT is set for production in 2016. It will mark the 50th anniversary of the GT40's legendary domination of the 1966 24 Hours of Le Mans race. 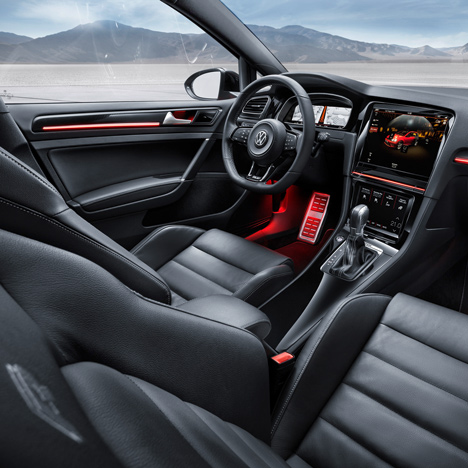 "It's worth remembering that our first innovation as a company was not in a laboratory, but on a racetrack," said Ford president Mark Fields, referring to Henry Ford's win of a 1901 car race that inspired financial backers to invest in the company.

The new GT – the first launched by Ford since 2005 – is an update on the previous model and is powered by a mid-mounted engine, meaning it is positioned centrally rather than at the front or rear. This positioning enhances the overall balance of the vehicle while enabling efficient power delivery to the rear wheels.

The power itself comes from Ford's latest iteration of its EcoBoost engine, which has been designed to improve fuel efficiency and reduce greenhouse emissions.

Strong but lightweight materials are used throughout the chassis, including its subframes – structural scaffolds used to carry components of the car – that are made from aluminium and strengthened with carbon fibre panels.

Using lightweight materials for the chassis has the effect of improving the vehicle's acceleration – which experts speculate will hit 60 miles per hour in just three seconds on this model – while also enhancing handling and improving its overall power-to-weight ratio.

The vehicle's carbon fibre skin forms a low-sitting "tear-drop" shape formed to slice through the air at high speeds, as well as maintaining a reference to the styling of Ford's classic 1960s GT version.

At the rear of the car, a sensor-controlled active spoiler reactively deploys and adjusts its height and pitch depending on driving conditions.

The vehicle's two-seat cockpit is accessed via two upward-swinging doors, and features seats integrated into a carbon fibre cell. Using carbon fibre to form the interior surroundings for the driver and passenger further reduces weight, in addition to providing a sensory connection to the chassis.

The Ford GT was unveiled on Monday at the North American International Auto Show in Detroit and comes at a time of growing confidence in the US car industry, following its near collapse as a consequence of the economic downturn that began in 2007.

Car reviewers described the high-performance supercar as the first risk taken by Ford since the recession began, and suggested it was indicative of a wider consumer appetite for luxury vehicles.

"We are passionate about innovation through performance," explained Mark Fields. "And we aim to create vehicles that make people's hearts pound."