The blocks of colour that make up both the Microsoft logo and the Windows 8 interface formed the basis of this temporary pavilion in Russia, created for the technology giant by architecture studio Nowadays (+ slideshow).

Nowadays originally installed the Microsoft Technology Pavilion in Sochi's Olympic Park during the 2014 Winter Olympics. It has now been dismantled, but its modular design and collapsible structure mean it could be rebuilt on another site for a future event.

Rather than designing a simple box pavilion for the 25-by-30-metre plot, the architects decided to break the space up into smaller squares and rectangles, and used these as the framework for an assortment of smaller volumes surrounding a central courtyard. 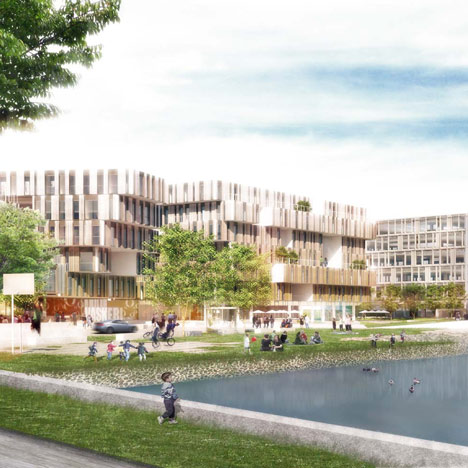 "One of the main requirements of the Olympic Committee was to locate a single volume on the site, but the clients wanted to create a public space where visitors could meet between competitions," explained the project team, made up of Russian architects Anna Ivyanskaya, Natalya Mastalerzh and Nata Tatunashvili.

"We decided to rethink the proposed layout of a single building in the centre of the site and distributed all the functions around the perimeter," they explained. "It gave us the opportunity to create a multi-level courtyard, saturated with various activities."

The rectangular segments were each assigned a colour, including vibrant shades of red, orange, yellow, blue, green and purple.

This correlates with both the four coloured squares of the Microsoft logo and the gridded interface of the Windows 8 operating system, and allowed the architects to create a series of different zones for various activities.

As the buildings needed to be easy to both assemble and dismantle, the team chose wooden slats to build each of the boxy structures. Slats were evenly spaced around the outer walls, reminiscent of fencing panels.

The sides of the slats were painted in the colours of the various zones, but the fronts were left unfinished to create a moire effect. Outer fences were given the same treatment.

"Wooden slats unite all the volumes on the platform in the whole complex, maintaining airiness and layering," said the Nowadays team. "While in motion, the moire effect appears."

During the event, the pavilion hosted a variety of activities, from product demonstrations and XBox gaming to exercise classes, face painting and hairstyling. An "energy bar" was also installed in the courtyard, offering participants a selection of drinks.