Experimental design agency The Future People has unveiled a prototype for a hybrid electric- and human-powered "car" at this year's North American International Auto Show in Detroit (+ slideshow).

The small and aerodynamically designed Zeppelin is one of two new concept designs unveiled as part of the Future Cycles project by The Future People, which aims to "combine the weather protection and carrying capacity of a car with the efficiency of a bicycle". 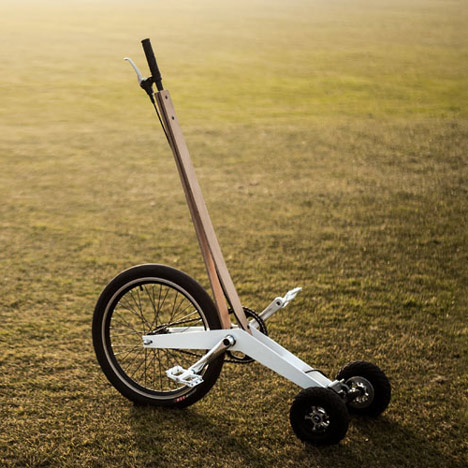 The vehicle can achieve a cruising speed of 25 miles per hour on flat ground using a combination of human pedalling and an electric motor.

"These are concept cars in the true sense," said designer Cameron Van Dyke. "They propose an alternative set of values in relation to transportation. My hope is to get people to imagine new possibilities for the way we travel."

"The goal with the Zeppelin was to find an ideal point at which a bicycle and car could coexist within the same object."

The structure of the vehicle was created using lightweight materials including aluminium and polycarbonate, resulting in a total weight of just 123 kilograms. The pod-like body comprises a series of curved horizontal panels that have been bolted together.

The vehicle is designed for two riders to sit side by side underneath the domed roof, which hinges up from the back to provide access. Each person has their own set of pedals to propel the car forward, while a 750-watt electric rear motor offers a 20-mile range.

Despite being designed to fuse aspects of a bicycle with a motor vehicle, the hybrid meets the legal definition of a bicycle in many American states, meaning neither a licence nor insurance is required to operate one.

The second design, called Cyclone, is purely pedal-powered and references both the Model T – the world's first mass-produced vehicle created by Henry Ford – and what Van Dyke calls "iPod styling" in its form.

Featuring brushed aluminium details and an interior of leather and mahogany, the Cyclone was created using boat-building techniques in combination with bicycle technology.

This vehicle is peddled by two riders and has the capacity to carry cargo, as well as an additional two passengers.

"The Cyclone offers a concept for a future vehicle," Van Dyke explains, "but it also poses questions about the history of automobile culture itself – its values and its priorities."