Swedish designer Jonas Wagell has created a simple lamp with a concrete base and a brass dimmer switch for Danish furniture brand Menu.

Named after the material used to form its cylindrical base, the "simple but functional" Concrete Lamp by Jonas Wagell was designed for Menu as part of an ongoing collaboration. 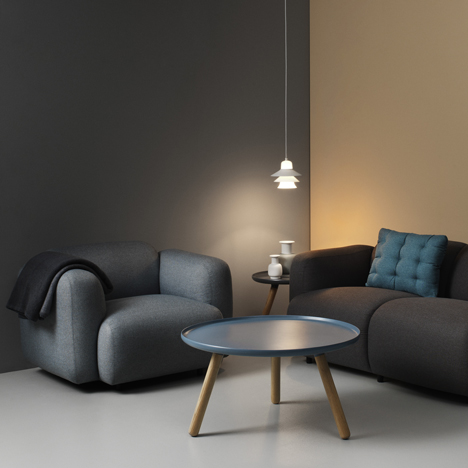 A circular brass dimmer switch located on the side of the base is used to adjust the levels of light emitted from the LED bulb, diffused through a frosted-glass shade.

"The raw character of the concrete creates a nice contrast with the delicate glass and the refined brass switch," said Wagell.

The rounded shape of the lamp's base and shade gives the same silhouette from every angle, putting emphasis on the protruding brass control.

"I like it when objects look round and friendly, and I always try to simplify and reduce clutter to reach a sort of essence of a product," Wagell told Dezeen. "Here I wanted to highlight the function of the dimmer switch and make that a prominent part of the form."

The concrete is moulded to form the shape of the base, which Wagell explained is more difficult than it sounds. "You need the right mixture and method to avoid air, which creates pores and bubbles."

Another challenge was to create a rough look but a smooth finish, while making the shell thin enough to fit the dimmer and electrical components inside.

The glass shade is created using a traditional technique that involves blowing the molten material in a graphite mould.

Wagell has a continuing partnership with Menu's creative directors Jonas Bjerre-Poulsen and Kasper Rønn, who are also the co-founders of Copenhagen studio Norm Architects.

"The concrete as a material is a collaborative decision with Norm as part of their creative direction," said the designer. "Concrete is one of the materials they have introduced in the new collection and we felt it could be suitable for this product."

Wagell hopes to launch editions with different base materials in the future.