Named Airspace, the solo exhibition showcases two new bodies of work by Stadler. The Parisian gallery will be filled with ten objects, which can each be roughly categorised as a piece of furniture. 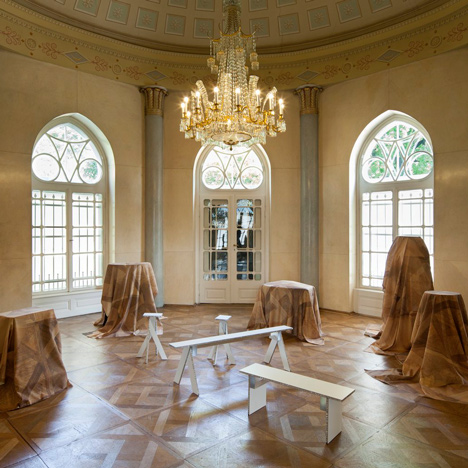 "These are two strongly contrasting but complementary series of objects inspired by the history of architecture and the art of construction through time," the designer told Dezeen. "All works correspond to a more or less defined function but which isn't systematically revealed at first sight."

The first seven pieces on show form the cut_paste collection, which explores construction and contemporary architectural practice. "Cut_paste appears as a haphazardous assembling of some cutout slabs on a construction site," Stadler told Dezeen.

It includes objects that can be defined in contemporary terms as a shelf, a sideboard, a bench, a bookcase and a low table.

Each object is made up of panels of different materials, from marble to aluminium honeycomb. Stadler describes the panels as "remains of an imaginary construction site" that have been sawn-off and discarded.

The panels are fixed together at right-angles and mounted parallel to each other, resulting in regimented angular objects that seem to reference architectural models and floor plans.

The collection's name comes from this visual reference to materials that have been cut into pieces and then pasted back together.

The other series on show consists of a bench, a mirror and a coffee table. Its name, PdT, is an abbreviation of "pierre de taille" – the French phrase that describes masonry made of large square-cut stones, known in English as "ashlar".

The name reflects the production process; each object is made from blocks of limestone, laid alongside each other with thin joints. The assembled blocks are then cut digitally, hollowed out and finished by hand to create the final rounded polished shapes.

The weighty masses of stone will occupy the gallery space like architectural ruins. "PdT appears as remains of an ancient building, which has been rounded and down-scaled by the passage of time," Stadler told Dezeen.

The low bench is flat at one end and rounded at the other, and will lie across the gallery floor like a fallen eroding column. Another block – similar in shape and size to the bench – stands on its end, sliced in half lengthways with a mirror fixed to the cut edge.

A low block of limestone, narrower at the base, forms the coffee table that is rounded at the edges like a weathered architectural element.

The two series of objects will occupy the space in very different ways. "From certain angles the spectator looks through cut_paste and the background becomes a part of the perception of the piece. The air circulates through the objects," said Stadler. "On the other side, the spectator's view is blocked by the massive presence of PdT and air must flow around it."

Airspace is on show at the Carpenters Workshop Gallery in Paris from 17 January to 4 April.

Photography is by Adrien Millot.