Furniture by designer Robert Stadler has gone on display alongside sculptures by Isamu Noguchi at the museum dedicated to the late Japanese-American artist's work in Queens, New York.

The Noguchi Museum is hosting the exhibition titled Solid Doubts, which opened yesterday, and encourages visitors to find relationships and draw comparisons between Stadler and Noguchi's work.

"The exhibition will explore the ways in which both Robert Stadler and Isamu Noguchi probe – and sometimes undermine – the nature of and distinctions between 'art' and 'design', 'functional' and 'aesthetic', and 'material' and 'space', among other object-based concepts," said the museum.

Stadler's pieces, which sit somewhere between design and art, are split across four installations in the ground-floor galleries of the museum – founded and designed by Noguchi inside a 1920s industrial building in Long Island City.

Noguchi Museum senior curator Dakin Hart worked closely with the Paris-based Austrian designer to match up items from the museum's archive and Stadler's oeuvre to date.

"Robert Stadler works the fertile land where conceptual, aesthetic, functional, and material considerations meet," said Hart. "This is the same zone that Noguchi explored and laboured so hard to expand during his six decades as a category-defier."

The first of the installations pairs a table, a mirror and a bench from Stadler's 2015 PDT (Pierre De Taille) collection with three whitewashed plywood pieces Noguchi created for Martha Graham's ballet Herodiade in 1944.

Stadler's travertine items appear to have been eroded by the elements over time, but are actually digitally milled into shape.

They are intended to provide a theatrical set for Noguchi's characterful pieces, which also act as a stool, a mirror and a clothes rack.

Another gallery hosts designs from Stadler's 2004 Pools and Pouf! series, which looks like traditional English Chesterfield tufted-leather furniture that is melting across the walls and floor.

These experiments with form are echoed in Noguchi's take on Japanese Akari lanterns – prototypes he created in shapes warped from the typical symmetry of the lights.

Three designs from Cut_Paste, Stadler's ongoing experiments with thin slices of marbled stone veneers, are mounted onto aluminium panels, which could be mistaken for offcuts from a construction site. Each in the trio is built from intersecting flat planes, forming a table, a shelving unit and a storage module that incorporates a bench.

The furniture pieces serve as platforms and supports for a variety of Noguchi's pieces that also address layering and planar assembly.

Two pieces of Stadler's work have also been installed in the museum's idyllic garden. The table and chair from his 2008-10 Rest in Peace series are moulded from cheap garden furniture that the designer cut into so they look like they are disintegrated, then cast in aluminium so they will never lose their shape.

In contrast, Noguchi's monumental stone sculptures dotted around the oasis are gradually wearing away as they sit exposed to the elements.

"This exhibition, the museum's first to feature a contemporary designer's work in dialogue with Noguchi's sculptures and designs, is a powerful demonstration of Noguchi's lasting relevance," said museum director Jenny Dixon.

Elsewhere in New York, new work by Stadler is set to go on display in a solo show at Carpenters Workshop Gallery – and as part of the Collective Design fair from 3 to 7 May. 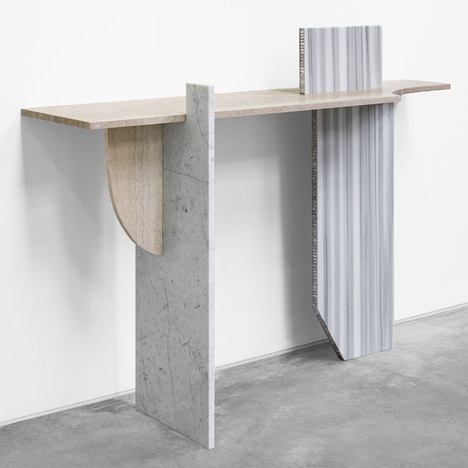