Claesson Koivisto Rune's designs for the Matsuso T range include a curved chair, a bookshelf that doubles up as a room divider and a small side table. 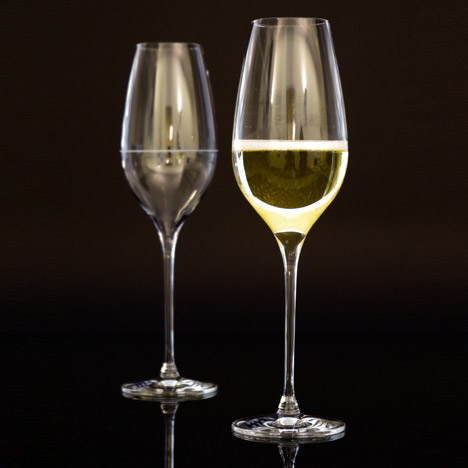 "The effect of the walnut and maple is both graphic and fun, like the confectionery wafers you couldn't stop eating as a kid," said the designers. "But it is also technically challenging to combine two types of wood."

"And, not least, to seamlessly morph round-section legs that meet flat planes. Finally, the stripe pattern has a different scale for each piece of the collection, fitting the size and geometry best."

The Wafer Chair has the widest stripes of the three items, running horizontal across the back and continuing onto the seat.

"The seat is purposefully curved more generously than anything that can be achieved with normal wood veneer lamination and the striped effect accentuates this," said the designers.

The Wafer Shelf has a more tightly-striped pattern than the chair but retains its thin edges and the shelf's leg supports mimic the radius joint detail seen on the underside of the chair.

Each shelf is slightly smaller than the one below it, providing a tapered appearance.

"We have intentionally given the shelf a smaller proportion. It still works as a space-divider but in a 'low wall' format as opposed to a higher, room dividing shelf," the designers said.

"The petite size of the shelf broadens the number of situations where it can be used. It can be positioned against a wall but it works best as a freestanding object in a room as it has no obvious back."

The Wafer Side Table has the most densely striped pattern of the collection and is designed to be small enough to be picked up and moved, giving it the flexibility to be used as a bedside table or a coffee table.

Claesson Koivisto Rune has also designed W151, a set of three oversized cone-shaped lamps for Swedish lighting brand Wästberg, and in April 2014 launched a wallpaper collection influenced by the shapes and patterns found in Modern architecture.

The Wafer Collection is set to launch at the IMM Cologne trade fair, which will take place from 19 to 25 January.

Photographs are by Takumi Ota.