Maison&Objet 2015: Basque designer Jean Louis Iratzoki has moulded the shell of a chair from a plant-based polymer that is fully recyclable and biodegradable (+ slideshow).

Jean Louis Iratzoki claims that the Kuskoa Bi chair designed for Basque furniture brand Alki is the first on the market to feature a 100 per cent bioplastic seat. 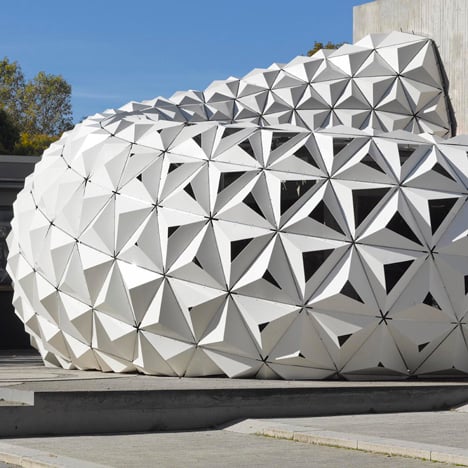 ArboSkin pavilion made from bioplastic by ITKE

"We decided that the collection we are presenting for Alki, Kuskoa Bi, had to be a comfortable, enveloping chair and to achieve this we opted for a semi-concave shell," said Iratzoki.

Injection-moulded seats are commonly formed from non-renewable plastics, produced using finite fossil fuels that are considered harmful to the environment – something Iratzoki wanted to avoid.

"The production of plastic not only depletes the world's diminishing fossil resources, it is also a pollutant that harms the environment and is therefore contrary to Alki's fundamental principles on sustainable development," the designer said.

As an alternative, Iratzoki's studio researched and developed a type of plastic that is made using only renewable plant-based resources such as beet, corn starch and sugarcane.

The compound is obtained using a series of mechanical processes, followed by a fermentation period. The resulting polymer can be injected, extruded and thermoformed into the desired shape.

"This bio-based polymer is fully recyclable and its organic properties mean that, when subjected to an industrial process, it is biodegradable," said Iratzoki.

Shaped to support the arms and back, the shell sits within an solid oak frame that cups the underside of the seat.

A version of the chair is also available covered in a wool-based upholstery.

The design is set to launch at Paris trade fair Maison&Objet, which opens on Friday and continues until 27 January.