Satellite by Richard Hutten is a swivel chair supported by three solid steel legs, with an upholstered seat and back. 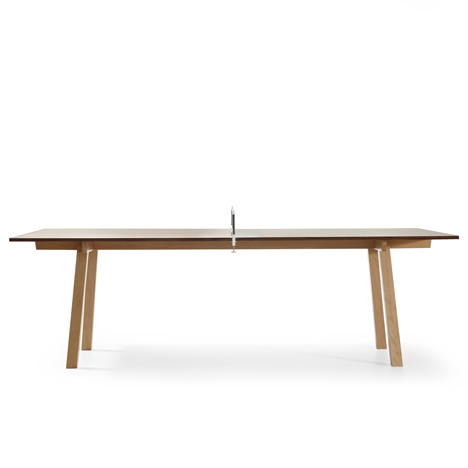 An attached side table can orbit 180 degrees around the seat, making it fit for left- and right-handed users.

"Architects always draw circles very fast to indicate where to position chairs on their floor plans," said Hutten. "I thought that was a nice gesture, so I drew a circle and said that it should be the top view of the chair."

According to the designer, the chair's shape allows it to be positioned anywhere around a room and orientated in any direction.

"To me the circle is the most elegant form, there are no bulky sides and it can go in all directions, which means it's never out of place," he said.

The seat is made from laminated wood, upholstered in leather and is attached to the backrest with a steel support.

The frame rotates 180 degrees, and has a return fitting so the chair can spin back to its original position.

"We did a lot of research into the size," said Hutten. "It should look inviting, comfortable and generous, but at the same time be light, compact and flexible enough to move around and that is a contradiction."

Satellite marks the third collaboration between Richard Hutten and Swedish furniture brand Offecct, and will be presented at this year's Stockholm Furniture Fair from 3 to 7 February.

Last year, Hutten debuted a chair design made from 545 stacked layers of Kvadrat fabric during the Salone del Mobile in Milan, and in 2012 he launched his a range of seats formed to look like smartphone icons at the Interieur design biennale in Kortrijk, Belgium.

Offecct will also launch a chair designed for a Tanzanian orphanage by Jasper Morrison at the Stockholm event next month.