This timber-clad casino by a lake in eastern France is one of three that Data Architectes designed to offer an alternative to the "locked universe" typically favoured for this type of building (+ slideshow).

Located to the south of Lac du Der, the new building is intended to encourage more tourism in the area. But the French architecture studio was also asked to develop a design that challenges the traditional image of the casino. 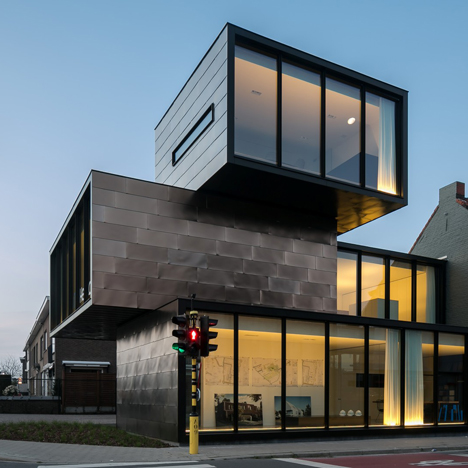 "Casinos tend to promote the image of a locked universe, devoid of natural light and closed in on themselves," explained Data Architectes, which completed its first casino in Montrond-Les-Bains in 2013.

"The main challenge was to seek and to conceive innovative solutions to change the image of casinos in the public eye, by transforming them into true multi-leisure centres open to all, where gambling is no longer the only asset."

The resulting design comprises two overlapping rectilinear blocks, each 15 metres wide. The lower block is set into the landscape and contains the operational activities, while the upper block houses all of the public attractions.

Both blocks are clad with different materials – one is a metal and glass box screened by timber louvres, while the other presents a facade of white-rendered concrete. This cladding helps the structure appear more like a public building.

According to the team, the aim was to create a building that is "aesthetically sober and simple, a presence yet without showing off". The forms are also expected to fit in with the local architectural vernacular.

"The building's shape is characterised by the architectural design of the two 'layers', where the gap between them creates terraces and slopes," said the architects.

There are two public entrances to the casino. The first is a staircase that leads in from a plaza at the south-west corner of the site, and the second is an elevator that comes up underneath a section of the building that is raised off the ground on pilotis.

Beyond the lobby, facilities include both games rooms and dining areas. Staff offices in the lower block are flanked by large windows.

The Lac du Der Casino opened to the public just before Christmas and is run by casino operator JOA. As well as the building's in Montrond-Les-Bains and Lac du Der, Data Architectes will complete another project in La Seyne-sur-Mer at the end of this year for the same client.