Flowers are framed within the sliced spherical tops of these glass vases by Norwegian designer Kristine Five Melvær (+ slideshow).

"[The transparent glass] gives the flowers light, and the user a full view of the content, while at the same time defining the space around it," said Melvær, who has also designed lanterns that comprise one coloured glass bubble sat within another. 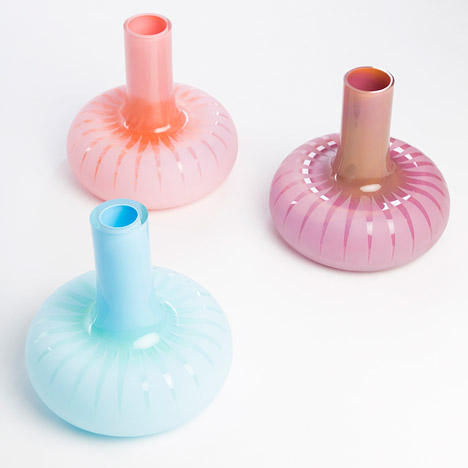 In four of the vase designs, openings for the flora are created by removing sections of the spherical tops at an angle.

The remaining glass forms a hood around the single plant it displays, framing it within the circle. This shape also helps to hold up the top-heavy flowers.

"The flowers or light get their own defined space, emphasising them as the focal point, and giving them extra value," Melvær said.

The thinner bases supporting the bowls come in various heights to accommodate different lengths of stems.

These "lantern" designs are also available in cobalt blue glass, which the designer says makes "light within it appear like the moon on a dark night sky".

Two of the designs borrow shapes from vessels in Melvær's collection of bulbous Graphic Vases, launched last year. The first has a thin lower portion and a much wider upper section, allowing the plants to spread out higher up.

"The shape and size of the vase makes it reminiscent of a large tree that towers over the other vases, an association that is underlined by the organic shapes of the entire series," Melvær said.

In contrast to the other top heavy designs in the collection, the final vase has a wide bottom that abruptly narrows into a long thin neck.

"It can for example accommodate a handful of wildflowers on the windowsill or a single wild rose on the nightstand," said Melvær.

Melvær's other products include a set of lamps that look like buds about to burst into bloom and a series of sheer silk room dividers in pale, graduated colours.