The Mono-Light by design duo OS & OOS is made from LED strip lights with silicon foam connectors that can be bent and weighted to the ground or suspended from the ceiling to create a variety of forms. 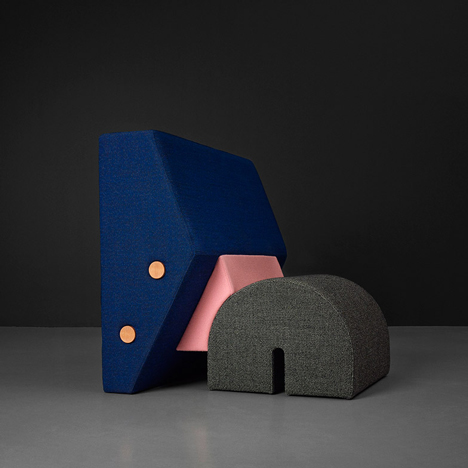 The studio is presenting Mono-Lights in an installation at new Danish design fair Northmodern, currently taking place in Copenhagen.

LED strip lights that emit a low temperature are tucked within a white plastic casing to allow the sections to be handled.

"We wanted to make lights that could be put in any position," studio co-founder Sophie Mensen told Dezeen. "We were thinking about materials of the future, that need to do more than one thing."

Spongey silicon foam connectors on either side of the light casings can be bent or twisted to create sculptural forms.

The strip lights can be joined to each other to create one long piece of alternating illuminated sections and coloured foam pieces.

Small disks made from grey-veined marble root the ends of the light tubes to the ground or wall and connect the lights to a power source.

Aluminium disks threaded through silicon foam loops are suspended from the ceiling to encourage the tubes to drape.

The Mono-Light, which comes in white, peach or grey, can also be used singularly to form smaller light installations for the home. OS & OOS presented the copper version of the light at Gallerie Gosserez during the 2014 PAD art fair in Paris.

The LED lights are available in two brightnesses: a fluorescent version more suitable for displays, and a softer, warmer light more suited for domestic use.

The studio is also showing its set of colourful geometric mats that can be zipped together to form different compositions at the Northmodern event, which concludes tomorrow.

OS & OOS will launch new publication Synopsis, which outlines the studio's manifesto and concept behind their designs, later this year.