Chinese studio Naturalbuild has created an office and event space in a Shanghai warehouse that previously belonged to Huang Jinrong – a notorious 1930s underworld figure (+ slideshow).

The space is located within a two-storey building by the city's South Bund dockyard, described by the firm as the "gangsters' warehouse" in reference to its former proprietor. 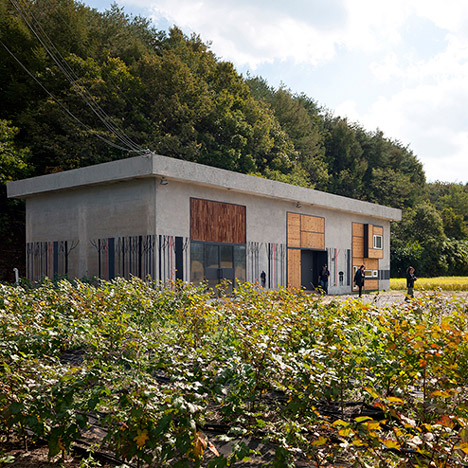 Huang Jinrong was a prominent and senior ranking Chinese officer in the French Concession Police. He was, however, believed to have strong links to Shanghai's criminal underworld, including an involvement with mob boss Du Yuesheng. Naturalbuild describes him as "a tycoon of Shanghai's most notorious gangsters".

The architects were tasked with transforming the upper floor of Huang's former warehouse – a space with a floor area of around 1,000 square metres, and a ceiling that extends up to almost 10 metres high.

Their approach was to minimise the addition of new materials and, where possible, retain the wood flooring that was already in place. The ceiling's worn finish was also left as it was in some parts.

"By gently stripping back decaying layers of wood and plaster, treating the existing timber structure, and combining this with utilitarian and inexpensive materials, a raw aesthetic has been created not dissimilar to the original warehouse," said the design team in a statement.

Other features intended to maintain this unfinished appearance include a plain white paint scheme and the preservation of pre-existing structural features like corbels and clerestory windows.

The space, described by its architects as being a "dumbbell shape", is based around two areas either end of the building, conjoined by a corridor that runs the length of the plan.

Eight gables – two on each end of the main spaces – support the building's lofty roof, while numerous wood and steel trusses offer the structure additional support.

Entry to the upper floor is via stairs to the immediate left of the street entrance. Internal access is also possible via a staircase situated close to the middle of the building.

The external entrance leads up to a set of doors that follow through to the floor's joint reception and event space. Most of this foyer-like area showcases the building's original full-height ceiling, and benefits from multiple sources of natural light, along with original wide plank flooring.

To the immediate left of the entry point is an events area with a lowered ceiling, where exhibitions and talks are accommodated. Adjoined to this is a seating section that links to a small kitchen.

At the far end of the floor, an open-plan office houses around 60 bespoke metalwork desks.

Toilets and six small, enclosed meeting spaces are positioned on the interior-facing side of this connecting corridor, while a glassed conference room faces the exterior. These spaces feature white-painted boards for both their ceilings and walls.

"As a whole, the design respects and celebrates the historical vernacular of the city," said the architects. "The renovated space evokes a sense of contradiction while still provides a coherent experience throughout."

"It addresses a new type of working space, a connective environment where nomadic individuals can work independently in a community that generates a level of synergy," they added.

The office is the largest space on the floor. Pre-renovation wood flooring is found here, complementing the original wooden struts, and a U-shaped bookcase runs along one side of the space.

Photography is by Howard Chan.