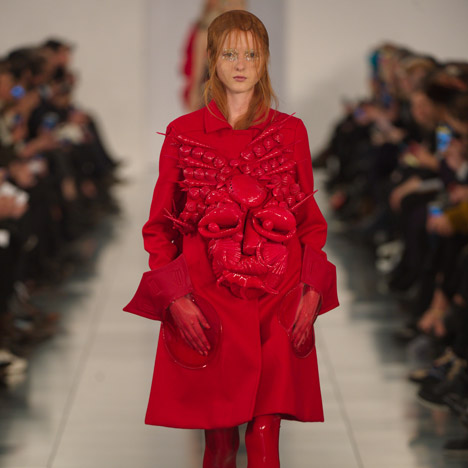 In keeping with his "Remade ethos" of recycling materials, the British designer found a new use for the inflatable emergency vessel, which was coloured bright orange and yellow to attract the attention of rescuers for those adrift at sea.

Raeburn tailored the durable rubber material into a parka and a bomber jacket, which still display the black writing and markings found across the survival vessel.

An all-black rubber field jacket was also crafted from the underside of the raft, while more of the colourful panels were worked into a backpack and a shark-shaped holdall.

The original white arrow graphic – used on the raft to demonstrate its correct orientation – could be seen on the jacket and was recreated as a motif on other garments, pointing upward on tops and downward on trousers.

Continuing with the same theme, latex rubber was used to create inflatable puffer jackets and gillets, blown up using the plastic valves found on swimming armbands.

Bright orange and red featured throughout the collection to punctuate the dark blues, greys and black thought to evoke a stormy sea.

Shark and shark-tooth patterns were applied to sweaters, T-shirts and joggers as digital prints.

More traditional fabrics and materials such as Merino wool and waxed cotton were also implemented across the collection.

Raeburn ventured into footwear this season for the first time, collaborating with London brand Purified to create a boot and a shoe to complement the garments.

The latest edition of the biannual London Collections: Men event took place from 9 to 12 January.

Other designers and studios that presented included Sibling, which showed garments made from pink fur and brown paper, while John Galliano chose the occasion to return to fashion with his inaugural haute-couture collection for Maison Martin Margiela.