French design student Charline Ronzon-Jaricot has created a device that releases a bespoke scent during a moment users would like to remember (+ slideshow). 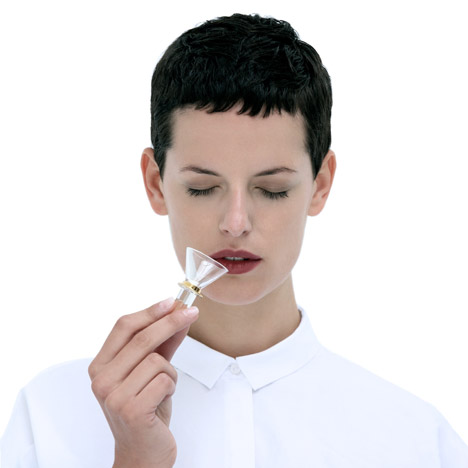 At a chosen moment, the user breaks the tip off the flask to release one drip of the liquid scent. This is soaked up by the plaster pebble.

The intention is that the user removes the pebble from the device and stores it away until they want to recall that specific moment, when the scent should evoke memories of the chosen event.

To enable just one drop to be released, Ronzon-Jaricot designed the flask with a small glass ball that obstructs the broken tip, allowing just one drop through. The flask was hand-blown by the Silicybine society in Paris.

"The aim of this project is to highlight the strength of olfactory memory by creating one's own 'madeleine de Proust'," said the designer, referring to French novelist Marcel Proust's famous passage on voluntary and involuntary memory. Proust related how the taste of madeleines – small French cakes – relates to "a micro-event that brings back memories of youth".

Proust wrote: "The smell and taste of things remain much longer, like souls, remembering, waiting (...) and bear unfaltering, the immense edifice of memory."

Ronzon-Jaricot worked with Parisian perfumer Sarah Burri to create a new scent that wouldn't have any pre-existing associations, using only synthetic molecules.

"We worked on a surprising smell that didn't activate any common imaginary," she said. "It had to be neither a room fragrance nor a body perfume."

The designer also experimented with a range of materials to find which would best soak up the scent. Porcelain did not capture the odour, and clays altered the smell. Plaster offered the most neutral option.

"I also needed something easy and not to expansive to work with, because I had to make many of them for my presentation," said Ronzon-Jaricot, who hopes to continue developing the project that she created as a student at Paris' École Boulle design school.