Within the intricately moulded interiors of this Parisian office block, architect Estelle Vincent has inserted a trio of boxy timber meeting spaces – one of which is can be exited down a pale blue slide (+ slideshow). 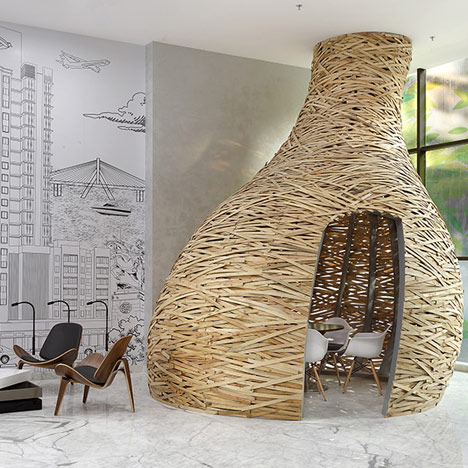 "The challenge of the project was to find a way in this heterogeneous 1,000-square-metre space to carry an image that is both consistent and corresponding to the identity of Ekimetrics – mathematical in its expertise in marketing, as well as young, dynamic and artistic," said the architect.

The shed-like spaces, all featuring slatted pale timber walls, were designed to provide semi-private meeting rooms and gathering spots within the open-plan office space. Each one was made by carpenter Fabric-K.

"In order to maintain some privacy, the open spaces are connected or punctuated by various more informal areas such as informal conference rooms," added Vincent.

The first structure, called Eki Cabin, sits in the centre of the lavishly decorated boardroom and contains a permanent office space for two people.

An angular nook in its asymmetric gable is filled with 24 wooden box-stools that can be unpacked and stacked into tiered seating to accommodate large meetings within the outer space.

The pale ply walls and minimalist design was intended as a deliberate contrast to the elaborate setting.

Inserted between two banks of desks and two arched windows in another room is a smaller four-metre-cubed meeting space named Eki Cube.

A triangular slice in one corner provides an entrance to a meeting room decorated with geometric-patterned paintwork. Sliding doors can be pushed across the opening to complete the cube.

A flight of steps partially concealed behind the slatted exterior wall lead to an upper level crows nest perched just below the ceiling.

From here staff can descend via a pastel-blue slide, which emerges from a wall covered in pigeonhole-style lockers.

The largest of the three meeting spaces, the Eki Gallery, is slotted into a timber framework in the shape of a house.

In the adjoining reception area, an L-shaped bracket printed with the company logo surrounds a soft seat area.

In addition to these three cubes, Vincent added a fourth wooden structure in the staff canteen. Here, food is dispensed from a hatch in a giant and brightly coloured cut-out of a food truck, named Eki Truck.

Photography is by Arnaud Schelstraete.