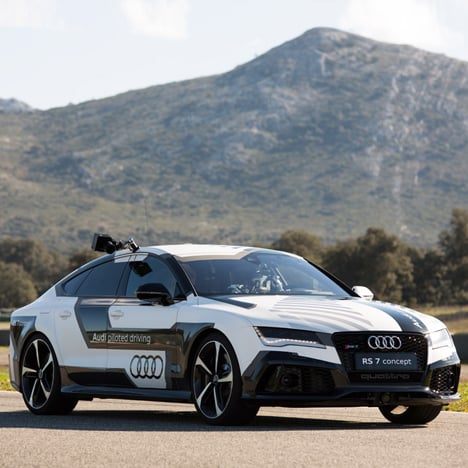 Their Robochop installation allows online users anywhere in the world to harness the power of one of four robotic arms – more commonly used to manufacture cars – and control their actions to carve anything from furniture designs to abstract sculptures out of a 50-square-centimetre cube.

Located in separate spaces, the robotic arms are equipped with a needle gripper at the end, which they use to pick up, hold and move the dense foam blocks from a storage unit.

Mounted in front of each robot's pedestal is a cutting wire, used to slice sections from the cube as the machine moves its surface over the heated element.

An app designed by Kram/Weisshaar provides the interface for users to create a set of instructions for the robot, by making hand gestures on a touch screen.

Once the design is complete, the file is uploaded to the system and the cutting process takes place. The finished products will be packaged and posted to their creators.

From 16 to 20 March, both internet users and on-site visitors to the CeBit 2015 IT fair in Hannover will be able to participate.

The project follows the 2010 Outrace installation set up in London's Trafalgar Square, which allowed users to trace light patterns with six robotic arms.

"In 2010 Outrace enabled people all over the world to take over giant robotic arms to write messages in light," said Weisshaar. "With Robochop we are going all the way to let users manufacture real world objects rather than media."

Kram/Weisshaar recently installed a film studio inside one of Audi's super-fast driverless cars to capture the reactions of passengers experiencing the high-speed journey.