Following the death of a loved one, American artist and designer Mia Cinelli created this "weighted comfort object" that could simulate the feeling of being hugged.

Mia Cinelli realised she missed the embraces she received from her fiancé's father, so designed The Weight to help remind her of him. 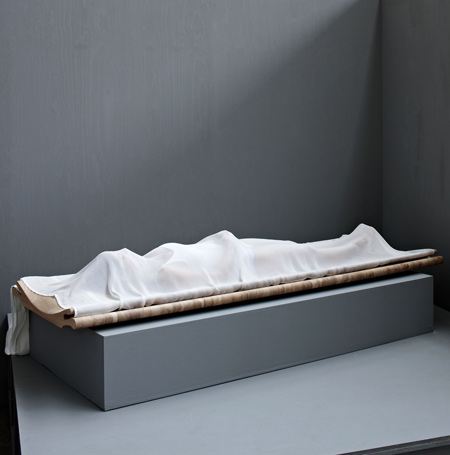 "My fiancé's father was a man who showed his love in physical ways – kisses and bear-hugs were a common greeting," she told Dezeen.

The Weight is a six-pound hand-quilted fleece blanket filled with poly-pellets, that has arms and hands attached to either side, enabling it to wrap around the user's body and entwine with their fingers.

Weighted blankets are already used in occupational therapy to relieve the stress, anxiety and lack of focus often associated with Attention Deficit Disorder, Attention Deficit Hyperactivity Disorder, Autism Spectrum Disorders, and Sensory Processing Disorder. The feeling of pressure on the body created by the blanket is believed to create a relaxing effect. Adding hands was Cinelli's idea.

"When he passed away, I was left with a void of where his large personality had been," Cinelli said. "I wanted to feel his presence, so I made a hand to hold."

Despite initial scepticism, Cinelli's fiancé was eventually convinced. "I'd bring rice-filled prototypes into our living room, drape them around him and ask him how he felt while he was wearing them and after he took them off," said the designer.

"Its use imitates an intimate gesture, reminiscent of a hug from behind," Cinelli added. "When you feel relaxed and take the weight off, you feel lighter – both physically and in spirit."

The designer admits the project might be disconcerting for some: "I have seen it tagged as #creepy online, and the hands are a bit odd. When I finished it, I couldn't tell if it was too weird or just right, but I think all of my best work falls into that area."

The Weight is currently a hand-made prototype and is being exhibited while Cinelli contemplates its future.

"Is it a custom-made cultural object kept by grieving loved ones? Does it become standard equipment of funeral home directors? Is it an elite object of comfort intertwined with high fashion, or is it sold next to heating pads in pharmacies?"