News: German sports brand Adidas aims to use design to increase its market share in America, according to executive board member for global brands Eric Liedtke (+ interview).

Adidas wants to topple arch-rival Nike as the dominant brand in the USA and has poached senior Nike design staff, as well as moving its creative director from Germany to Portland, Oregon. 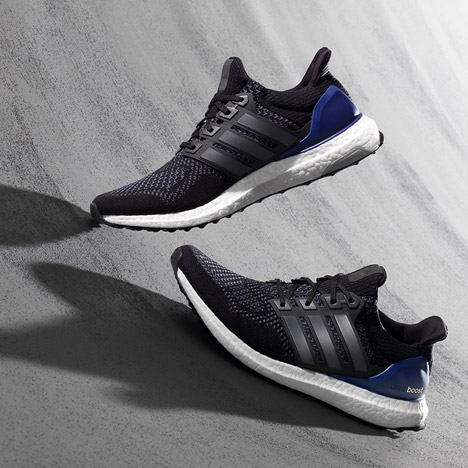 "I need to overcompensate in America from a design point of view," Liedtke told Dezeen. "I need to get this right [in the USA], because we're not having the success we are in Europe right now."

As part of the offensive, Adidas hosted the global launch of its Ultra Boost running trainer in New York last month, flying in journalists and athletes from around the globe.

"We win a lot more in Europe right now than we do in America," Liedtke told Dezeen at the event.

The launch followed news that Adidas had hired Mark Miner, Marc Dolce and Denis Dekovic, senior figures in Nike's footwear, football and basketball design studios. The three will set up the first Adidas Creative Studio in Brooklyn later this year.

Adidas has also named Paul Gaudio as its global creative director, promoting him from general manager of "digital sport" and relocating him from the brand's headquarters in Germany to its offices in Portland.

"One of the places we've been weakest is in the States, so we went out and recruited top design talent from our competition and we're going to open up a new studio here in Brooklyn," Liedtke told Dezeen. "We're going to look at different design studios so we can continually infuse fresh thinking into us."

Oregon-based Nike has set the agenda in terms of sportswear innovation, design and marketing over the last few years, leaving Adidas trailing in its wake. The two are currently embroiled in a legal battle over their knitted upper technologies.

Nike has even attempted to threaten Adidas' traditional stronghold in football, sponsoring more teams in last year's FIFA World Cup. But despite Nike's eye-catching guerrilla marketing tactics, Adidas was widely seen as the victor with its Battlepack boots worn by the competition's biggest goal scorers.

Adidas is hoping that the Ultra Boost, which has a new sole construction designed to generate more energy from each stride, will help redress the balance.

"Competition always brings out the best. And our industry seems to be uber competitive," said Liedtke. "We're very aware of what our competition is doing every minute of every day. It doesn't mean we obsess over it."

While football is a major market in Europe, "soccer" is much less popular in the US and Nike has a far greater share of the US market. According to business news site Forbes, Nike products represent 59 per cent of trainer sales in the US; Adidas just 10 per cent.

Running will be the initial focus in his strategy for north America. "Running is the number one sport participation in the world. It's the number one category in our business," said Liedtke. "It's kind of like the gateway drug, if you will."

The design of the Ultra Boost, with a muted black and blue upper and low profile, also reflects the resurging popularity of sportswear in mainstream fashion.

"We spend all sorts of money on research and development to make sure we're helping athletes be better, but then it has got to look good," said Liedtke. "When you get that recipe together – you get those two sides together – that's the magic. Then you really get the commercial success."

Read an edited transcript from our interview with Eric Liedtke:

Anna Winston: Europe and America are quite different consumer markets. How do you create products for a global market where aesthetic taste can vary so wildly?

Eric Liedtke: When it comes down to making the best for the athlete, that's not different – and that's the first place we start at. And then you have to look at where the aesthetic differences are and where they aren't. I listen a lot more to England when it comes to football boots. When it comes to running shoes I listen more to the Americans. You have to look at the culture of the sport too, and you'll be able to play that a little bit differently.

Anna Winston: There's seems to be a pretty unique kind of competitiveness between the big brands – you and Nike – that's really pushing both of you to be more innovative.

Eric Liedtke: Is it unique, or is it just competitiveness?

Eric Liedtke: Ah okay. That's different. There you go! I think competition always brings out the best. And our industry seems to be uber competitive. We're very aware of what our competition is doing every minute of every day. That doesn't mean we obsess over it, but we're aware of it.

It goes back to sports for me. I have to watch game film to know how I can beat my competition. So I watch what they do, I study what they do religiously, I know how they're organised, I know who's gone where, when and why and I adjust accordingly. I study them, and I try to make us better because of it.

Anna Winston: You've recently made some quite high profile additions to your design team. What do you look for in a designer?

Eric Liedtke: It's interesting you ask, because I've spent a lot of time over the last nine months obsessing over how we build a better culture of creativity and innovation.

One of the things that I had to do was make an organisational decision where design actually would report into the businesses. It's not to sit on them – it's so they can influence the business more directly, because in the past you would have walls put up where design and marketing would argue and it would end up on my desk to be judge and jury. I don't want that. I want one insight coming in.

Then what I want to do is go out and really upgrade our talent and make sure we're getting insights we need. One of the places we've been weakest is in the States, so we went out and recruited top design talent from our competition and we're going to open up a new studio here in Brooklyn. We're going to look at different design studios so we can continually infuse fresh thinking into us.

It's kind of an art to say how you'll bring in these cultural moments. We are already talking about opening up a design studio in Tokyo as well. So we have these cultural directions coming in and we will infuse that point of view into the creative process.

Anna Winston: Why Brooklyn first? Is it just because it's where the designers wanted to be?

Eric Liedtke: Brooklyn is a fresh east coast perspective. We can't pretend we have all the answers on the west coast. We took Paul [Gaudio, Adidas global creative director] out of Germany and put him Portland. We wanted to make sure the studio was based in America, with a creative director here, so we get that American point of view, but we don't want to settle for Portland. Portland is a great town – my favourite town in America – but it doesn't mean it's the leading town from a creative standpoint. New York, we could argue, is. It's not any more complicated than that.

We were actually looking at Brooklyn or London. We were looking at the two and we were weighing the odds of both, and ultimately our need to succeed in America outweighed the need to be in London. But I wouldn't say we would never open a design studio in London.

Anna Winston: Is it fair to say that running is where most of the innovation is happening in sportswear design?

Eric Liedtke: Running has always been critical to us. For the most part Adi Dassler founded us on running and football – or soccer – and those are the two areas that we have always kept closest to us. They are also the two areas that you innovate the most in, if you think about it. And then you take those innovations into other places. So, for example, we always start our innovations with [plastic sole technology] Boost and Primeknit in running. We'll get it right there and we can bleed it through to other areas whether they be rugby or American football, or basketball or tennis, or whatever. Running is where you start to quantify your foundations.

Running is also the number one sport participation in the world. It's the number one category in our industry. It's kind of like the gateway drug, if you will. Why? Because it's simple: you just need a pair of shoes and some shorts and you can do it by yourself, right?

As you get more into the endorphin rush you can maybe graduate into "Okay, running is a part of it, but now I want to do a class. Now I want a personal trainer, now I want to do cross-training, now I want to do pilates, or spinning," or whatever it may be. The expenditure gets bigger, the commitment… All of those things are important, but running is still your core. I'm not a runner per se, but I ran this morning - because I'm in New York, I don't really want to go to a gym I want to go outside. When I travel I run, it's my base.

Anna Winston: Sportswear seems to be having a fashion "moment", with running footwear on the catwalk and lots of celebrity collaborations.

Eric Liedtke: There's always a sneaker-head. Sneaker-head culture is always going to be there, and it's playing up bigger than ever. I'm going from here to Paris tonight to look at the runways, because it's all "Superstar this" and "Stan Smith that" and running shoes there. It's like the whole fashion world is all over sport. And by default – because running is the biggest category – you start to see more and more of that. It's sneaker culture that's really booming right now, as well as track pants – those things are defining worlds I didn't even imagine before.

The running silhouette, or the low profile silhouette, is always the standby. That's why [with Ultra Boost] if some people come in and say: "Well, why black?", I say: "Well, because black is the most fashionable." That's why I can wear it with slacks and during a presentation – because it just all kind of goes together.

We spend all sorts of money on research and development and thousands of hours working with athletes, to make sure we're helping athletes be better, but then it has got to look good. And when you get that recipe together – you get those two sides together – that's the magic. Then you really get the commercial success.