Simons – who showed his Autumn Winter 2015 menswear collection in Paris this week – has updated his range of trainers for the sports brand and introduced two new designs.

Also debuting in the French capital, the fifth Adidas by Raf Simons range take its cues from the gear worn by some of the first space explorers. 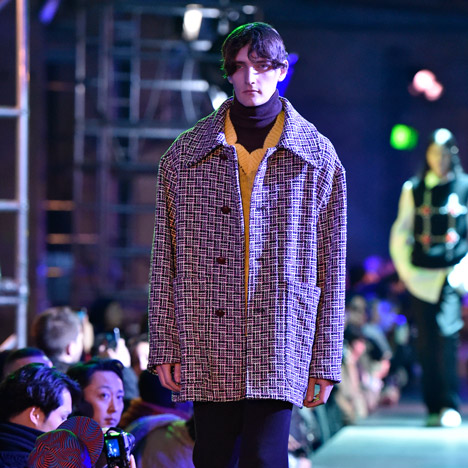 "Inspired by vintage astronaut suits and backpacks, moulded and machined details similar to authentic closures, zippers and straps are added," said a statement from Adidas. "Shiny versus matte distressed materials complete the look of outer space."

The interstellar aesthetic has been created with the use of silver tones, gauze-like textiles and metal details.

Ozweego Robot and Response Trail Robot are both reinterpretations of styles in the previous collaborative collection.

Coloured metal rings surround oversized lace eyelets and lines are picked out in black zigzag and gold stitching on the Response Trail Robot, recognisable for its jagged grips.

The Ozweego Robot, which features a gap between the front and back of the sole, features similar stitch patterns and metal embellishments.

As one of the eyelets is removed, the fastening has to stretch right across the upper to lace up. It passes beneath a leather strip and feeds through a fabric loop attached above the sole before crossing back over the tongue.

Simons' take on the Stan Smith trainer, to which he has added dots punched through the side to form an "R" and his name pressed into the heel.

The iconic style has now been created in four different versions of distressed leather, treated to give an aged look.

The Response Trail II is updated in all black and all white, with interchangeable spoilers that wrap around the ankle in contrasting colours.

Also in new colours, the Ozweego II now comes entirely in red as well as off-white with black details.

Presented during Paris men's fashion week, the footwear is due to retail in July at Adidas concept stores in Paris and Berlin, as well as selected boutiques worldwide.

Yesterday, Adidas launched its Ultra Boost running trainer that combines a knitted upper and an "energy return" midsole at an event in New York.

Another pair of space-themed studios were presented earlier this month by Studio Swine – a pair of high heels to look like lumps of meteorite.

More from Adidas and Raf Simons