Rick Owens has adapted the designs of his 2014 Runners for the sports brand to create two styles of boot and a revised trainer, each with the same chunky two-part sole. 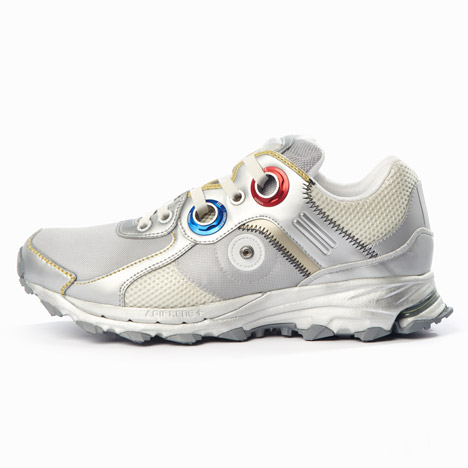 Raf Simons' trainers for Adidas are based on vintage space suits

The Runner Stretch Boot has an upper that extends up to just below the knee, available in sand, brown and black suede, as well as brown fur.

"The fusion of fashion influenced sportswear is being taken one step further with this footwear model elaborated into a high boot with a 40-centimetre-long fitted and draped upper," said a statement from Adidas.

An elasticated Velcro panel stretches across the back to act as a fastening and ensure a tight fit.

Similar designs for the Runner Ankle Stretch Boot are slightly shorter, but come in the same colour and material options.

Owens' original Runners have also been reintroduced with a less-padded collar, available in all-black full suede and in a black mixed leather edition.

The designs were presented at Paris men's fashion week earlier this month, along with Raf Simons' trainers for Adidas based on vintage space suits.

The Adidas by Rick Owens Autumn Winter 2015 range will be available in both men's and women's styles from July.

Last season, the Paris-based fashion designer combined blade-like soles with calf-high leather uppers for his ongoing collaboration with the brand.

Adidas also recently launched a trainer that it says will "revolutionise running" at an event in New York.