Behind the Georgian facade of a dilapidated house and workshop in west London, West Architecture has slotted in a new residence that pairs industrial fittings with period details (+ slideshow).

London studio West Architecture reconstructed and extended the mid-terrace home and workshop to create the new Fitzrovia House. The original building had been bomb-damaged during the Second World War, resulting in its partial demolition and reconstruction in the succeeding decades, but by 2013 had fallen into disrepair again. 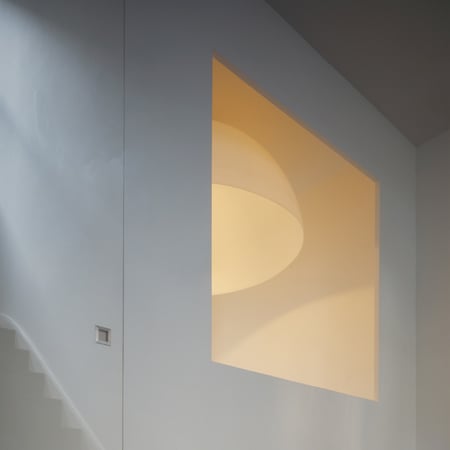 Retaining only the perimeter walls of the house, garden and a former workshop to the rear, an entirely new structure was inserted. A rooftop extension was added to provide a new master bedroom and terrace, while a new basement excavation creates space for a kitchen.

A single-storey glazed structure connects the original house and workshop, leaving space for a small courtyard. "This courtyard is the key to the project, all living spaces rotate around it and derive light and air from its footprint," studio founder Graham West told Dezeen.

Contemporary materials were used to differentiate between the new and old parts of the building. Sash windows with timber frames are set into the original facade, and the rooms behind feature wooden floorboards and dado rails. But the extension has aluminium window frames, poured concrete floors, exposed brickwork and metal fixtures.

The roof extension is faced in black zinc at the rear and lead at the front, in keeping with this programme.

"Typically, the rear elements read as new interventions whilst at the front we were aiming to revive as much as possible of the original character of the house," said West. "The facade has been restored to reflect the well preserved period character of the court."

An existing wooden staircase connecting the lower floors of the building was retained and painted white, while original dark timber panelling was exposed and preserved.

A new flight of stairs links the third-floor bedroom to the dressing rooms and bathrooms located across the first and second levels.

Photography  is by Peter Cook.