News: the firm led by American architect Thom Mayne has been selected to design a new 100-suite hotel adjacent to Peter Zumthor's Therme Vals spa in Switzerland. Update: the competition jury has now "dissociated itself" from the decision.

Los Angeles-based Morphosis – known for buildings including the Perot Museum of Nature and Science in Dallas and the Hollywood campus of Emerson College – was chosen ahead of New York architect Steven Holl and London studio 6a Architects for the luxury hotel project in Vals. 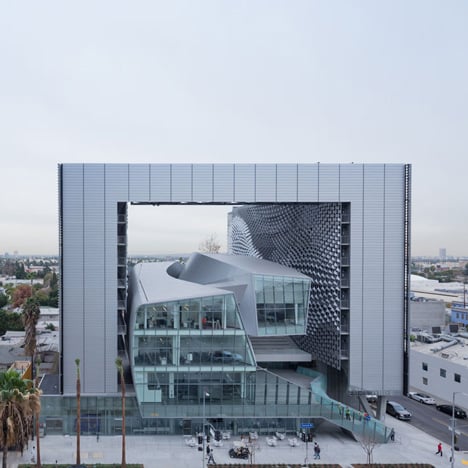 The client for the project, 7132, already operates one hotel beside the Therme Vals spa – a building considered by many as one of the most important works by Swiss architect Peter Zumthor.

Built over the only thermal springs in the Graubünden canton, the spa was completed in 1996. It features walls of locally sourced Valser quartzite slabs and a grass roof.

The new hotel is planned nearby. Morphosis is expected to reveal its competition-winning design next month at an event in New York City.

Mayne – who was awarded the Pritzker Prize for architecture four years before Zumthor in 2005 – commented: "We are thrilled about the jury's decision and look forward to working with a visionary client to create a unique design that resonates with this incredible destination in the Alps."

A total of eight firms were originally shortlisted for the competition, which was launched last June. A jury led by Sauerbruch Hutton co-founder Louisa Hutton recommended the schemes by Morphosis, Holl and 6a, before the client made its final decision.

More from Morphosis and Peter Zumthor