The four buildings that make up this house on Scotland's Isle of Skye were designed by Dualchas Architects to reference the shape and appearance of an old black shed found nearby (+ slideshow).

The black residence is the latest in a series of houses that Scottish firm Dualchas Architects has completed on the isle, which is part of the picturesque Inner Hebrides archipelago. 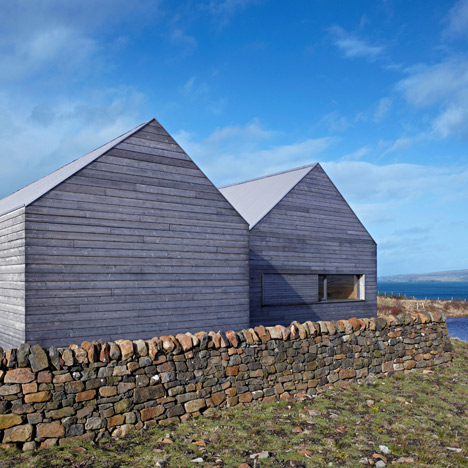 Named Colbost after the hamlet it is located within, the family house sits on an elevated farmland site boasting views over Dunvegan bay. It is made up of four buildings – two large and two small.

Two floors of bedrooms are housed within the tallest volume, while its large single-storey neighbour contains living and dining spaces. The pair of smaller structures provide a shed, a wood store and a shelter for a heat pump.

"The design is directly inspired by a black shed on the adjacent croft, simple in form and clearly rooted to its landscape," explained Dualchas Architects in a statement.

"The form developed out of a desire to lose the bulk of the relatively large building into the shadow of the cliff behind, so that the one and a half storey element containing all the bedrooms sits behind the main simple communal living space in front," added the firm.

Each building is externally clad with horizontal strips of Siberian larch, which are stained black. Corrugated aluminium panels cover the rooftops, but are coated with a protective black finish that helps them to match the walls.

There are no visible gutters and no projecting eaves, giving each building a fuss-free aesthetic. "Flush detailing to the building envelope, achieved by concealing the galvanised steel gutters and downpipes, gives the volumes a taut appearance and the overall composition one of a grouping of distinct and simple forms," said the architects.

"From the road it appears as a simple low agricultural building, discreet and low lying."

The arrangement of the four buildings around the perimeter of the site creates a semi-private courtyard, screened from the harsh winds typical of coastal sites. An outdoor shower here allows residents to wash before entering.

The entrance leads into a glazed corridor between the two main buildings. On the right, the sequence of living spaces starts with the dining area and adjoining kitchen, which are sandwiched between two lounge rooms.

Bedrooms are divided up between the ground and first floors. The larger two can be found upstairs, both with their own private bathrooms. There's also a games room in this block.

The air-sourced heat pump provides the house with plenty of warmth, but residents can supplement the supply using two wood-burning stoves. The walls and roofs are also highly insulated to ensure the house is as energy-efficient as possible.

Dualchas Architects has completed more than 15 houses on the Isle of Skye over the last 20 years. Others include a cliffside home that mixes silvery larch wood with traditional Scottish stone and a boxy wooden house on the southernmost tip of the island.

Photography is by Andrew Lee.