Stockholm 2015: Swedish designers Siri Bahlenberg and Sofia Bergfeldt have created a lampshade made of ice that slowly melts back into its mould so it can be re-frozen and used again (+ movie).

Encased in an angular block of ice, the Melt and Recreate lamp is illuminated using a combination of LED lights and fibre optics.

The LEDs are suspended above the ice and the light that they emit is conducted through the solid mass by the fibre optics – making the potentially lethal combination of water and electricity safe. 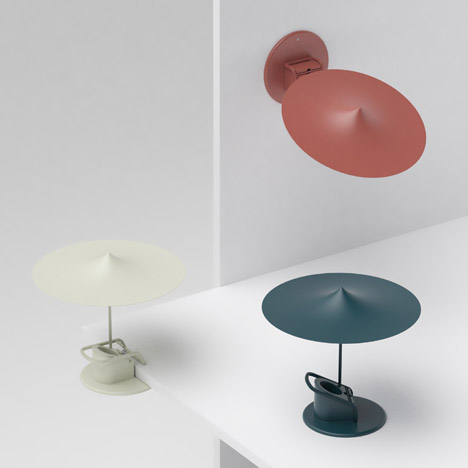 Inga Sempé adds functions to the clip lamp for Wästberg

The light is diffused through the frozen water, giving off a dim glow that gradually becomes brighter as the melted ice drips away.

"In one way it's a throwaway product because it disappears, but we keep the water so it can be remade," Siri Bahlenberg and Sofia Bergfeldt told Dezeen.

The LEDs and fibre optics are contained within an element that detaches from the metal fixture. This element sits on top of the mould so the water freezes around it, holding it in place.

Once solid, the element and its icy shade are clipped back into the conical fixture and connected to the electricity supply.

The lamp's original mould is placed below the pendant to collect the meltwater, ready to be reused.

"We wanted to create a relationship between the user and product," said Bahlenberg and Bergfeldt. "For this lamp to have a continuing life, the product has to be reborn and you have to engage with it to make that work."

"We want to awaken reflection and awareness about the consumption of everyday objects that often are taken for granted," they added.

It takes 10 hours for the lamp to melt and another 10 hours for it to refreeze – and each casting is different.

Depending on the ambient conditions, the ice may be clear or translucent. The dimensions of the plastic mould are designed to fit a standard-sized freezer.

Bahlenberg and Bergfeldt designed the light to become a centrepiece for a room. "Just like enjoying a fireplace, the lamp brings a natural element to the home that creates a soothing environment, both visually and with the soft dripping sound," they said.

Melt and Recreate was presented in the Greenhouse area for emerging talent at the Stockholm Furniture Fair earlier this month.