News: Studio Fuksas has been selected to design a major new convention centre in Canberra, with a proposal that features wavy floors and a bulging, elliptical roof.

Australia Forum will be a 27,000-square-metre convention centre, comprising a 3,000-seat plenary hall, a ballroom with a capacity for 1,500 diners and an exhibition hall, as well as administrative offices, meeting rooms, storage and shops.

Studio Fuksas, in collaboration with Canberra firm Guida Moseley Brown Architects, was commissioned to produce the preliminary designs by The Land Development Agency – the governmental arm responsible for developing and selling land on behalf of the Australian Capital Territory Government. 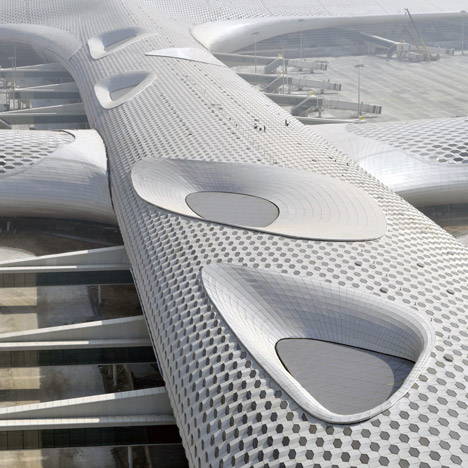 The convention centre will be located in the centre of Canberra at one apex of the National Triangle – a triangular area of the city encompassing the Parliament House and the Ministry of Defence. The area was set out by American architect Walter Burley Griffin in his masterplan for the city.

Australia Forum will sit on the shores of Lake Burley Griffin – an artificial lake created in the 1960s – that cuts through the centre of the triangle.

Concept drawings for the centre show a transparent form with an undulating roof and floor structure on a tree-lined plaza. The roof will curve gently into a mound at its centre, and a bulbous pod with a reflective surface will extend from the upper floor at one side of the building.

"The proposed volume, completely transparent and permeable, opens among the city and naturally integrates with the landscape," said a statement from the studio. "The surrounding hills and the Lake Burley Griffin, on whose shores the project lays down, seem to reflect on its skin."

"In constant dialogue with the urban context and the environment, the complex is conceived with extreme flexibility," the studio said.

The project is scheduled for completion in 2020 and will be partially funded by public-private partnership. This means that although the project and services are government-funded, private companies will assume the financial risk of the development, alleviating the potential risk to tax-payers' money.

The appointment of a design team for the Australia Forum coincided with the release of a report by Canberra Business Chamber and Canberra Convention Bureau entitled Australia Forum – and its Potential Economics Benefits.

According to the report, for each dollar invested in the development, AU$2.40 (£1.20) would be returned –more than doubling financial backers' investment over a period of two decades.