Massimiliano Fuksas of Studio Fuksas has been awarded the Premio alla Carriera Architettura prize, triggereing protests from architects including Denise Scott Brown, Rem Koolhaas and Bjarke Ingels, who feel his equal partner Doriana Fuksas should have shared the prize.

More than 250 architects, designers, writers and academics have signed a letter addressed to the president of the award's issuing body Istituto Nazionale di Architettura – Italy's national institute of architects – calling for "equal recognition for equal work".

Massimiliano and Doriana Fuksas back campaign

Massimiliano and Doriana Fuksas have both backed the campaign and are signatories of the letter.

It states: "Doriana and Massimiliano are equal partners. It's important to correct the record now so that young architects can look up to their incredible work and know the whole story – that the work is strong because of joint creativity and collaboration."

The letter was organised by campaigners from US-based Voices of Women (VOW) and Italian organisation RebelArchitette.

"The difference between man and woman at work is still a real problem all over the world," said Doriana Fuksas in an email thanking VOW founder Caroline James for the support.

"In my case the problem is not Massimiliano, my partner and husband, but quite every client and media. It's something difficult to face and many times I don't say anything."

New York architect Louise Braverman, one of the organisers of the letter, told Dezeen that this was an important moment for the architectural community to prove itself.

"It is pivotal for the field of architecture to evolve in tandem with a diverse society in order to remain relevant," said Braverman. 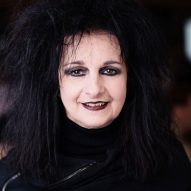 Odile Decq calls for female architects to "fight against harassment, against discrimination"

"Joint recognition for work that is created jointly is not only the right thing to do now, but will also enlarge the discipline to embrace respect for varied voices going forward," she added.

The institute's Lazio region president, Amadeo Schittarella, defended the decision to give the prize only to Massimiliano, saying that the Premio alla Carriera Architettura recognises an entire career and that Massimiliano began working 15 years prior to his partnership with Doriana.

"At this moment Doriana has a stronger role than Massimiliano in working on the architecture, but the career of a person is not the career of an office," Schittarella told the Architects Journal.

"The need for an equal treatment for men and women is absolutely correct... But we are not speaking of something I can share, I cannot give a prize to Massimiliano and Doriana if he started 15 years earlier. It's another story, another career."

VOW was also behind Venice protest

VOW founder Caroline James and Arielle Assouline-Lichten were the duo behind a similar campaign in 2013 to retroactively add Denise Scott Brown to Robert Venturi's Pritzker Prize, which had been awarded in 1991.

This year, VOW organised a flash mob during the Venice Architecture Biennale as a peaceful protest for equality within the profession. RebelArchitette was founded by Francesca Perani, and is currently spearheading the #timefor50 equality campaign.

"This petition is the first one in favour of an Italian woman architect," said Peranni. "We really hope that the call and the #timefor50 campaign can really effect the still not inclusive architecture system thanks to an international joint mobilisation of associations professionals and students."

Massimilano and Doriana Fuksas' practice Studio Fuksas is based in Rome and has offices in Paris and Shenzhen, together employing more than 170 staff.

The duo began working together in 1985 and Doriana became head of Fuksas Design in 1997. They co-authored a regular column in Italian newspaper La Repubblica from 2014 to 2015. They have both won a number of international medals and prizes for their contribution to the field of architecture.

Portraits of Massimiliano and Doriana Fuksas are by Gianmarco Chieregato.