News: Sony has announced that it will make its augmented reality eyewear prototype available for developers, following news that Google pulled sales of its own headset last month (+ movie).

Sony's SmartEyeglass Developer Edition SED-E1 is now available to pre-order for developers in the UK and Germany, after the prototype was unveiled in September. 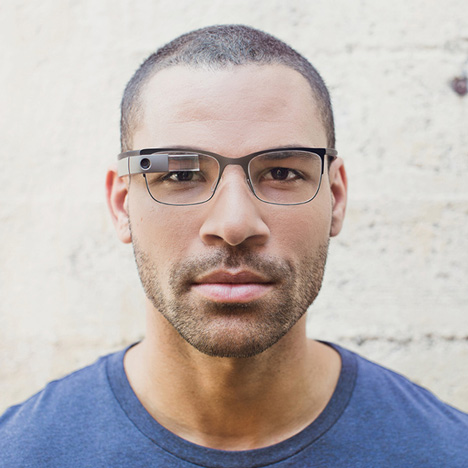 Google pulls sales of Glass to focus on development

"Over the last few months our SmartEyeglass prototype has been one of the most talked about smart eyewear concepts," said a statement issued by Sony yesterday. "Today the project takes a major step forward, as we announce both commercialisation and launch from March 2015."

Unlike Google's recently shelved product, which featured a half-frame with a small device on one arm, Sony's binocular headset features a thick frame that contains three-millimetre-thick lenses.

Monochrome text and information is displayed on the lenses, superimposed over the wearer's field of vision.

The device uses holographic technology that allows the lenses to maintain an 85 per cent transparency.

An accelerometer, gyroscope, electronic compass, brightness sensor and microphone are integrated into the 77-gramme device.

A three-megapixel camera for capturing photos and video is located behind the left lens of the eyewear.

Connected to the frames with a wire, a separate circular touch-sensitive controller includes an additional microphone, a speaker and a battery.

"This is about going beyond hardware," said project leader Hiroshi Mukawa when the prototype model was launched. "Our thinking is to match external creativity with in-house innovation to truly stretch the capability of the products we create – releasing the SDK early means that both our industry's most established and up-and-coming developers will help shape what SmartEyeglass is capable of."

The Developer Edition will also be available for developers to purchase in the USA and Japan. Enterprise customers in France, Italy, Spain, Belgium, Netherlands and Sweden will also be eligible to acquire the device.

At launch, a selection of SmartEyeglass apps will be available to download from the Google Play store.

"The SmartEyeglass Developer Edition SED-E1 will give developers access to both the physical sample and official supporting software developer kit – as we continue to grow the ecosystem of transparent binocular lens experiences and superimposed augmented reality content," said Sony's statement.

This followed several attempts to make the devices more visually appealing, including a collaboration with fashion designer Diane von Furstenberg and a partnership with a luxury eyewear brand.