Spanish studio LaSelva has designed a collection of hexagonal encaustic cement tiles with a pattern that joins up regardless of which way round they are positioned (+ slideshow).

Manuel Bañó & David Galvañ of LaSelva were inspired by a hexagonal mosaic tile featuring three connecting patterns produced by Antonio Gaudí in 1904, but wanted to make something even more flexible. 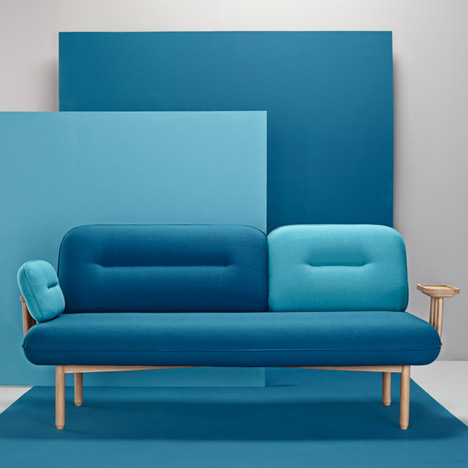 "The modularity was the key," Galvañ told Dezeen. "We wanted to make a module that even used at random would fit, creating a continued pattern. When we started to sketch the concept we realised it was like a maze, we created paths that sometimes ended and other times could continue throughout the whole composition."

The Atlas indoor tiles are handmade by Barcelona-based Mosaics Martí. The first layer is made from a mixture of white cement, marble sand and natural pigments, which are poured into a mould in the pattern that forms the top layer.

A second layer of cement and a third layer of sand are then added. When compressed, the second and third layers absorb the excess liquid from the top layer, enabling the tile to harden naturally.

"The new colours were hard to obtain with natural pigments but they give the modules more visual strength and fit really well with their existing palette," said the designers.

Users can mix and match tiles from different colour sets to create their own interpretation of the design.

Split between Spain and Mexico, La Selva has also designed a three-seater sofa that integrates a wooden drinks tray.