Music: the majority of the footage used in this super-slow-motion music video for French pop singer Siska was shot in only five seconds.

Director Guillaume Panariello's video for Unconditional Rebel is a super-slow motion film based around what appears to be a single tracking shot. 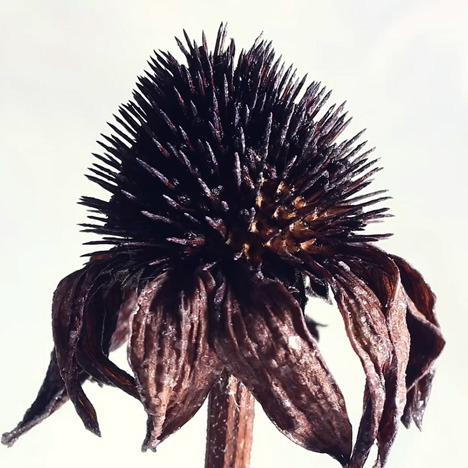 The footage taken from a passing car was stretched out to three and a half minutes for the final edit.

"It's a kind of living mural realised with 80 characters who are all synchronized with the movement of the camera," Panariello told Dezeen.

The clip shows a cast of fantastical figures in surreal circumstances, including a group of people beating each other with books and a woman in a wedding dress wielding a chainsaw.

The characters are all positioned along an 80-metre stretch of land in front of an industrial complex.

To make the video, Panariello and crew drove past the actors at approximately 30 miles per hour and filmed at an extremely fast rate of 1,000 frames per second.

When played back at a normal speed, the footage produced a very slow-moving film that captured the backdrop and cast in a fluid, detailed way.

Before shooting, Panariello consulted with special effects producer Benoît Maffone to make a detailed 3D model that enabled the director to plan and choreograph the entire film.

"After a lot of math we determined the speed of the camera movement and the size of the scene," Panariello explained.

After deciding to shoot beside an industrial complex in southern France, Panariello filmed four different run-throughs of the scene – each one lasting only a few seconds.

"I had a kind of map divided in several zones that correspond to the different music movements," said the director. "For the shoot we recreated the positioning of the zones. We were well prepared."

Although seemingly one uninterrupted shot, the video is actually composed of two takes. This was necessary due to the camera's restrictions while filming so many frames each second. Panariello was reluctant to explain where the cut is.

Subsequent to filming the main section, the director and his team then captured additional material using a chroma key process. This involves filming a subject against a vivid green or blue background and then, via special techniques, substituting this backdrop for another in the final footage.

Features such as the falling clocks, flying books and the initial appearances of vocalist Siska were created during this part of the film's development.

These visuals were augmented and accompanied by additional post-production effects such as the disintegration of the man pointing a gun.

Towards the end of the film, the camera appears to spin upside down, briefly inverting the image. This was also achieved through post-production effects.

In total, around 110 people were involved in making the video. In addition to the 80 extras, roughly 30 people constituted the crew and post-production teams.

"To my mind the most important thing is the perfect balance between the sound and the picture," Panariello told Dezeen. "No matter the technique or concept, the point is to create sensations."