Puppetry and a live action ocean made from cling film are combined with 2D animation in the music video for British band Coldplay's single Daddy.

Directed by Bristol-based animation studio Aardman's Åsa Lucander, the video tells the story of a girl longing for her father whilst lost at sea.

Lucander used the stylised movements of puppet theatre to reflect the girl's fragmented memories of her father, immersed in a digitally illustrated landscape.

Much of the video sequence was filmed in live action, rather than the stop-motion technique Aardman used in its Academy Award-winning Wallace & Gromit series.

Lucander has a background in illustration and animation. She told Dezeen that she combined the different animation styles so she could create a dream-like atmosphere to match the song.

"[The project] gave me an opportunity to include different media and supported the sense of surrealness and magic that I was after," she said.

During the song's introduction, the young protagonist is rowing a boat in a moon-lit setting. Lucander interpreted the heartbeat-like rhythm at the beginning of the song as waves hitting the side of the boat.

To imitate the water's surface, the team layered strips of cling film on top of each other across a three-metre-wide square frame.

They gently pulled and tugged the film by hand from the corners to create the impression of waves.

The director revealed that animating the ocean was the biggest challenge, because she wanted to film a physical model rather than rendering the landscape digitally.

"I really wanted it to be manipulated on camera – something tactile and hand made," she explained.

For the puppets, Lucander worked with creative partnership Brunskill and Grimes to create and animate the characters, using rods to manipulate the puppets and filming against green screens.

The puppet's face is expressionless so the animators relied on body language to portray emotion. Without a mouth or eyebrows, her remaining facial features were designed to create a look of "melancholy and airiness".

According to Lucander, the puppet's movements are intended to reflect how looking back on memories can leave out some elements, like a "fragmented tapestry".

"The language of puppeteering is very theatrical in its approach," she said. "I really appreciate the tender moments where the gentle, stylised movements synchronise with the emotional message of the song."

Halfway through the video, the girl trips and falls into the ocean where she lands on a whale lying on the seabed.

The whale appears to be carved from wood, and is segmented to make it seem to swim fluidly when manipulated by the puppeteers. 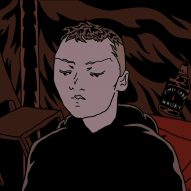 The animators edited marionette strings on to the animal in post-production, to align with the tactile feel of the video. As the whale flies through the sky, the strings break in time with chords in the song.

The 2D-animated features of the video are most prominent in the underwater scenes.

Fish and marine life are animated in a lo-fi style with visible brush strokes, which Lucander said represent drawings the girl would have made with her father.

Lucander worked with illustrator and animator Marc Moynihan to create a colour palette that is "poetic in itself" for the video.

A blend of deep blue and purple, with elements of brighter pink for the girl's clothes, are designed to support the emotive message of the song.

"When you are on the sea you feel quite small, and you quite quickly realise you have to surrender to something much greater than you," said Lucander. "But it can also be beautiful, calming and powerful."

Other animated music videos on Dezeen include a set of nine videos to accompany each track of Georgian duo's Kayakata's album and a stop-motion narrative of Dolly Parton's fight for song rights with Elvis Presley.