To kick off today's VDF collaboration with Beatie Wolfe, we're exclusively streaming the online premiere of the singer-songwriter's documentary Orange Juice for the Ears: from Space Beams to Anti-Streams.

The documentary, which has never been streamed online before, will be available free to Dezeen readers for the duration of Virtual Design Festival.

The film premiere will be followed at 1:00pm by an exclusive preview of Wolfe's forthcoming environmental protest piece Red to Green, and an essay by Wolfe in which she explores the power of music to improve the human mind and ease the suffering of people with dementia.

At 5:00pm UK time Wolfe will conduct a live interview with Dezeen founder Marcus Fairs, followed by an exclusive performance of her music.

Commissioned by the Barbican Centre last year, the 30-minute Orange Juice for the Ears documentary explores the work of Wolfe, a singer-songwriter based in Los Angeles.

Directed, shot and edited by Ross Harris, the film premiered at the Barbican Centre in London in October 2019, followed by an industry screening in Los Angeles. The film was commissioned as part of Barbican Centre's Life Rewired season, which explored how artists are responding to rapid technological change.

"With the season investigating the impact of the pace and extent of technological change in our culture and society, and looking at how we can grasp and respond to the seismic shifts these advances will bring about, there are few artists who exemplify this exploration as much as Beatie Wolfe," Barbican Centre said.

Music "can lift us out of depression"

The film's title comes from a quote by the late neurologist Oliver Sacks, who explored the relationship between music and the human mind.

"Music can lift us out of depression or move us to tears — it is a remedy, a tonic, orange juice for the ear," Sacks wrote in his book Musicophilia: Tales of Music and the Brain.

"But for many of my neurological patients, music is even more – it can provide access, even when no medication can, to movement, to speech, to life. For them, music is not a luxury, but a necessity.”

Born in London, Wolfe has pioneered new ways of combining music with design and technology. She released her debut EP, Burst, as an iPhone app in 2010, making her one of the first artists to explore the potential of apps as a format for musicians.

In 2013, her debut album 8ight was released on vinyl, in book form and as the "world's First 3D interactive album app".

Her second album, Montagu Square, was recorded live at 34 Montagu Square in London, which was at various times the home of Jimi Hendrix, Paul McCartney, Ringo Starr, John Lennon and Yoko Ono.

Recorded in the room where The Wind Cries Mary and Eleanor Rigby were written, the album was accompanied by a "musical jacket" created by fashion designer Michael Fish, who dressed rocks stars including Hendrix, David Bowie and Mick Jagger.

Intended as a way of recapturing the lost emotional connection listeners used to have with vinyl album sleeves, the tailored jacket contained near-field communication (NFC) chips that allow tracks from the album to be played when a smartphone is held up to the garment.

The Montagu Square album includes the track Take Me Home, an instrumental version of which was used as the soundtrack for the Virtual Design Festival launch movie.

Wolfe's 2017 album Raw Space was recorded in Bell Labs' anechoic chamber, a room described as "the quietest room in the world". 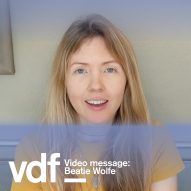 Lockdown is an "exercise in presence and gratitude" says Beatie Wolfe

The album was released as the "world's first live 360 AR stream". The album later became the first to be broadcast into space via the Holmdel Horn Antenna.

The Raw Space album was later issued as a set of NFC-enabled business cards, each of which was designed by a different graphic designer.

In 2018, London's V&A museum hosted a solo exhibition of Wolfe's work titled The Art of Music in the Digital Age: a series of world-first designs.

"Beatie Wolfe presents a series of album innovations that explore how technology can be used to recapture a sense of storytelling, ceremony and tangibility for music in the digital age," wrote the V&A about the show, held as part of London Design Festival 2018.

The documentary artwork is by Kizzy Memani of ArtCenter College of Design.

Virtual Design Festival runs from 15 April to 30 June 2020. It intends to bring the architecture and design world together to celebrate the culture and commerce of our industry, and explore how it can adapt and respond to extraordinary circumstances.

We will host a rolling programme of online talks, lectures, movies, product launches and more. It will complement and support fairs and festivals around the world that have had to be postponed or cancelled and it will provide a platform for design businesses, so they can, in turn, support their supply chains.