A grid of hinged metal shutters form a privacy screen across the windows of this terraced house in New York that architect Philippe Baumann designed for himself and his partner (+ slideshow).

The property is located in the Gowanus neighbourhood of Brooklyn and was designed by the Baumann Architecture founder as a conversion and extension of an existing 1950s garage. 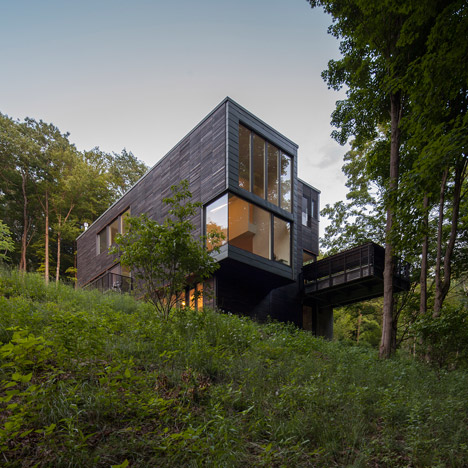 The architect added a second floor, courtyard and basement to the original cinder block structure, which was stabilised by adding a new steel framework.

A galvanised mesh screen continues the building line of the neighbouring structures and forms a protected smoking porch between the pavement and the house's wooden frontage.

This gap in front of the recessed facade also accommodates a balcony accessible from a corridor on the first floor.

Windows incorporated into the facade on both ground and first floor levels can be concealed behind the folding shutters, which are covered in a more dense perforated mesh than the rest of the surface.

The use of mesh and exposed galvanised metal references the site's proximity to industrial landmarks, including a concrete production plant and an elevated train track.

Two doors set behind the metal framework provide access to a long and narrow unbroken space that contains the house's kitchen, living and dining areas.

The ground floor plan is interrupted by a central courtyard, flanked on both sides by sliding glass doors that permit views of the sky and a fringe of plants sprouting from a rooftop garden.

A small patch of grass set into the concrete paving was added as a "reference to the American dream" – an ironic counterpoint to the home's urban setting. A corridor that runs along one edge of the courtyard connects the main house with a separate single-storey lounge area.

To the right of the main entrance is a kitchen accommodated behind bright yellow painted walls, while directly ahead is a staircase with open treads that leads to bedrooms on the first floor.

A raised walkway on top of the ground floor corridor leads from the landing to a vegetable plot on the roof of the lounge at the opposite side of the open space.

A further staircase ascends from the first floor to a garden full of indigenous plants that looks out towards the Upper Bay and the railway line.

Materials throughout the interior are applied in their raw state to enhance their inherent character and maintain the consistent industrial aesthetic.

The structural steel beams that punctuate the floor plates are left exposed, as are the concrete floors and cinder block walls in one of the bedrooms. A mesh panel flanking the staircase recalls the transparent facade cladding.

Skylights introduce natural light into the bathroom and circulation areas, with the glass treads of the staircases ensuring it is able to permeate as far as the basement.

Photography is by Michael Moran, unless otherwise stated.