Repurposed materials and decadent accents come together in this Buenos Aires restaurant and bar that fits within a historic house overhauled by local studio Hitzig Militello Architects.

Named Moshu Treehouse, the restaurant was built within a two-storey home in the Palermo neighbourhood, near the architecture studio's main office.

The neighbourhood is one of the older areas of the city and has a wealth of existing structures such as this one.

According to the architecture studio, traditionally, these Argentinian houses are built around a courtyard, which becomes the main gathering area for socialising.

Hitzig Militello Architects wanted to replicate this experience by creating a new courtyard area at the entrance that preserves the original facade of the home.

In addition to marking the arrival into the restaurant, this feature is intended to facilitate carry-out orders and outdoor dining.

A local Moshu tree planted in the courtyard gave the project its name.

"Our first major design strategy was to create an access courtyard immediately adjacent to the facade as both a symbol and shock effect," said Hitzig Militello Architects.

This new access courtyard allows visitors to enter the restaurant in two different ways: into the primary courtyard or up a set up stairs to access the second floor.

"This allowed for a new facade with a language of its own, the core idea behind it being the preservation of the old style of the main facade," it added.

Part of the courtyards facade is made up of a grid of windows with wooden shutters, which also cover the entrance to the indoor aspect of the restaurant. These are operable and can be opened up to capture the breeze, or closed in bad weather.

They are slightly angled and offset from one another, creating a dynamic and irregular composition. 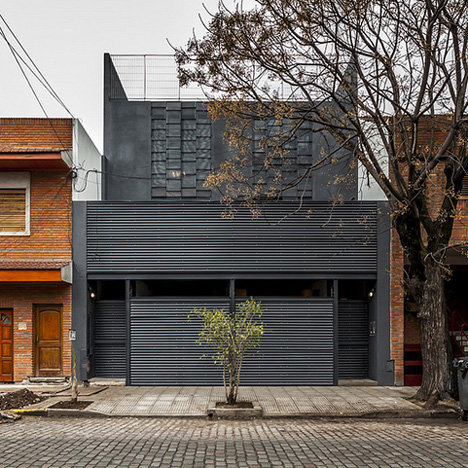 The restaurant itself is laid out on two levels, with a cocktail bar upstairs and a terrace at the back of the building. The interiors preserve many of the raw finishes from the existing home.

"The interior architecture language is one of vernacular composition of the typical demolished industrial style," they explained. "Surrounding them is a run-down, abandoned house where the dry vegetation has taken over," they added.

Hitzig Militello Architects also added some playful features to the interiors, such as accent walls made of different sizes of tubes that form an archway.

The ground floor contains a bar, and a variety of dining rooms set up inside or within small courtyards exposed to the sky.

Upstairs is a larger bar, which spills out onto a terrace overlooking the front of the building.

An exterior stair leads from this upper patio directly to the street-facing entrance. Depending on the restaurant's hours of operation, the upper floor can be reserved privately for events.

Hitzig Militello Architects was founded in 2006 and also has offices in Miami.

Buenos Aires has seen a number of renovations and additions to its existing building stock. Other examples include a home from the 1930s that underwent a "subtle" renovation by Torrado Arquitectos, and a self-designed office by Studio Nu that is set within a former auto mechanic's shop.

The photography is by Federico Kulekdjian.