The travelator-style runway was used to showcase the Autumn Winter 2015 collection from British designer Henry Holland's label during the show on Saturday. 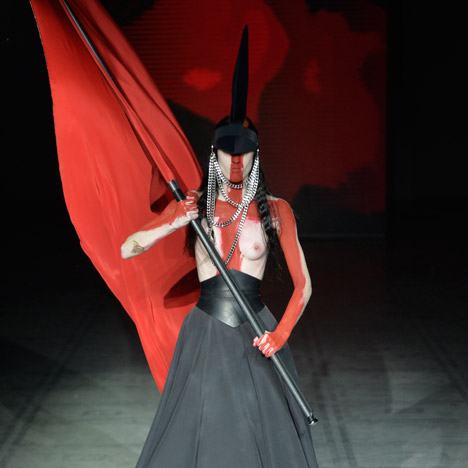 Yellow and black stripes marked the edges of the moving catwalk, which carried the models along three tracks that formed a U-shaped in the space at the University of Westminster, with audience members sat either side.

The hazard-tape motif was also used across the clothes in Holland's collection, titled Uptown Urchins.

Also presented in red-and-white and blue-and-white, the stripes were used in panels perpendicular to each other for shirts and in sections arranged at oblique angles for dresses.

Large checks were used at various scales, either in tones of pink or as rubber panels appliquéd to sheer fabric.

Combining these colours, a range of tartans – commonly used in Holland's designs – were applied in combinations to create patchwork garments that Holland described as "loose, oversized and co-ordinated".

"Tough", "kinky" and "put together" were also used by the designer to describe the collection, referring to his black rubber waistbands and latex trousers.