Cascades of water tumbled from scaffolding-supported troughs into a pool at the centre of the catwalk for British outerwear brand Hunter's London Fashion Week show (+ slideshow).

Set in a warehouse on London's Albert Embankment, Hunter's Autumn Winter 2015 presentation on Monday evening was designed to evoke the sights and sounds of Scotland – where the company was founded over 150 years ago. 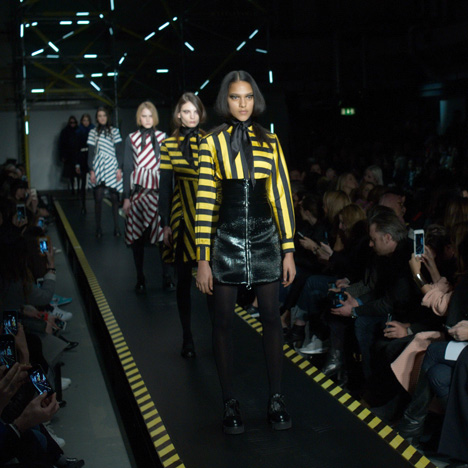 Three waterfalls were installed inside the cavernous space, each straddling the catwalk.

Scaffolding poles painted to match the red-orange runway supported a series of metal troughs, staggered both vertically and horizontally like steps.

Water pumped up from the pool in the centre of the catwalk poured down from the top basin as it overflowed into the trays below.

This cascade continued for the duration of the show, creating a soundtrack of falling water that accompanied sounds of thunder and rain played in the background.

Models wearing the Hunter Originals collection walked a loop around the kinked rectangular catwalk, passing beneath gaps in the scaffolding.

The concept for the set design came from the brand's creative director Alasdhair Willis. Hunter's team then worked with production company Gainsbury & Whiting to create the set.

Best known for its rubber wellington boots, Hunter has expanded its offering since Willis joined the company in 2013. The brand's product range has extended to include more clothing and accessories, and the set designs for its biannual London fashion shows have become more extravagant.

This show, which was also streamed live on giant screens across the UK, builds on the Autumn Winter 2014 presentation when models stomped down a water-covered walkway between bare tree trunks.

London Fashion Week took place over five days and concluded on Tuesday. At the House of Holland show a travelator catwalk transported models around, while a runway of pink foam spikes matched details on garments at Mary Katrantzou's event.