Perforated metal panels create a grid of Xs on the outer walls of this family house in Ljubljana by Slovenian studio OFIS Arhitekti (+ slideshow).

OFIS Arhitekti, the studio led by architects Rok Oman and Spela Videcnik, added perforated panels in different sizes and proportions to the facade of the three-storey residence, creating a privacy screen across several large windows. 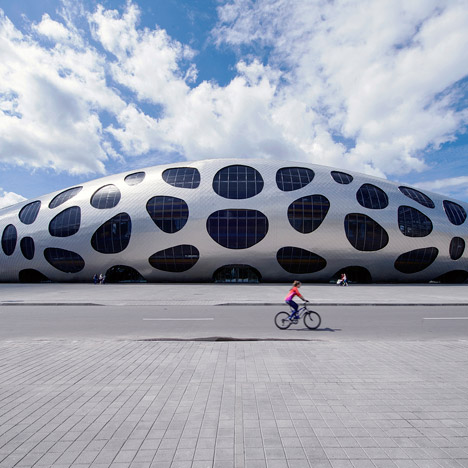 The panels allow plenty of light to permeate the building, but prevent views in from neighbouring residences and from passersby on the adjacent street.

Structural braces that support the panels are visible through the perforations, offering some decoration to the otherwise plain exterior. This feature gives the building its name – Villa Criss-Cross Envelope.

"The crosses have a functional task to reinforce the structural frame panels, but also work as a graphical representation, in the same way that ornaments are given to a historical villa," Oman told Dezeen.

"The perforated material, with holes on both sides, also aims to make an abstract interpretation of the texture of classical villas in the historical suburb. The task was to achieve texture through the illusion of depth," he added.

OFIS Arhitekti – whose past projects include a bleached larch house extension and an Alpine chalet – designed the 340-square-metre house for a family with three children in Mirje, just outside the centre of the Slovenian capital.

The building runs perpendicular to an ancient Roman wall that was restored in the 1930s by Slovenian architect Jože Plečnik – whose impact on Ljubljana has been compared to the role Antoni Gaudí had on Barcelona.

One particular feature of this wall is an arch encased within a triangle of stones and clockwork, referred to as "the pyramid" by OFIS. A building that previously occupied the site had been framed through this aperture, so the architects were keen for the new house to do the same.

"The villa's new structure embeds an existing retaining wall along the street front," explained the design team. "By incorporating the wall as part of the new construction, the new house keeps the original position on this street in an axial alignment to the pyramid."

The main entrance is located within one of several boxy recesses in the otherwise cube-shaped three-storey volume. Others include a terrace at the rear and a pair of corner balconies on the uppermost level.

Inside, exposed concrete walls and ceilings are textured with the markings created by their wooden formwork. Wooden flooring and joinery offer a warm contrast, while patches of perforated metal reference the exterior walls.

"The internal volume embodies two elements: exposed structural concrete walls and a wooden shell," said the team. "With no cellar, the shell is integral to provide all of the space for storage."

An open-plan living room, dining space and kitchen occupy the majority of the ground floor, and open out to the rear garden through a row of floor-to-ceiling glass doors.

The two upper levels are loosely divided into bedroom and study spaces, creating three bedrooms in total. The largest of these can be found on the second floor, and features an indoor hot tub.

Photography is by Tomaz Gregoric.