A small extension to the rear of this remodelled townhouse in Dublin is clad and roofed in panels of opaque black glass, designed by architectural studio Ailtireacht to reflect the building's surroundings.

Dublin-based Ailtireacht reconfigured the 18th-century house in Leinster Road, Dublin and added a single-storey extension that projects into the rear garden. 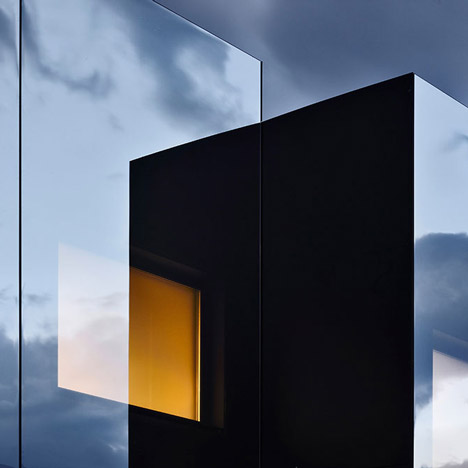 During previous renovations, the three-storey house had been subdivided into 11 studio flats and the original brick facade rendered over.

"One of the bedrooms was so small the previous owner had to cut down a bed to get it to fit in the room, something he was quite proud of apparently," studio founder Allister Coyne told Dezeen.

The studio was asked to convert the property back into a single dwelling and to restore the red brick and moulded facade – a contrast to the grey and brown frontages of adjoining properties.

They added the boxy extension to create a flexible space that can be used as a guest bedroom, playroom or home office.

Its black glass covering reflects elements of the architectural and garden setting, while from the upper floor windows clouds can be seen moving across the shiny flat roof.

"The house is on a north-south axis with a north and west facing rear garden, which is enlivened through the further use of black glass cladding on the new external extension walls and roof, reflecting movement from the sky over and from the basement living area," said the architects.

"The view over the black glass roof of the rear extension, flawlessly reflects the Victorian surrounding architecture and the movement of the moody overcast sky overhead," they added.

A large door with a dark wood frame pivots from the adjoining dining area onto a tiled terrace, where strips of transparent glass give views into the extension. Steps lead up from a gravelled border around the extension to a lawn surrounded by tall hedges.

Inside, a wide oak staircase connects the extension and adjoining dining area at ground-level, with an open-plan living area on the first floor, "stitching and integrating the contemporary informal spaces of the lower ground floor into the retained fabric of the upper floors."

A kitchen with a marble countertop is tucked under the new staircase and a larder is positioned towards the front of the property to provide extra storage, creating an uncluttered dining area.

Pale timber floorboards are laid in a zigzag pattern across the lower floor, while walls and corniced ceilings are painted white and closets are concealed behind dark wood panelling.

Upstairs, this theme is reversed with dark wooden floors and pale timber cladding. Plush furnishings and an ornate fireplace decorate the living space.

Three bedrooms occupy the third storey. In the master bedroom, a tall, dark wood door that matches the headboard opens into a black glass shower stall, while a second floor-to-ceiling door is concealed in the wall with white paintwork and skirting boards.

"This complementary and legible stitched fabric of old and new is expressed most clearly in the main bedroom, where a pair of concealed doors open to reveal a black glass-clad topless shower and en-suite washstand, reflecting its retained historical perimeter," said the studio.

Photography is by Barbara Corsico.