Slabs of concrete create sunshades that look like open shutters for the windows of this house in Argentina, designed by architect duo Santiago Carlos Viale and Daniella Beviglia (+ slideshow).

Suspended over a steeply sloping hillside in La Calera, a lakeside town approximately 35 kilometres west of Córdoba, the single-storey house was designed to suit the varying topography of its site and the hot Argentinian summers. 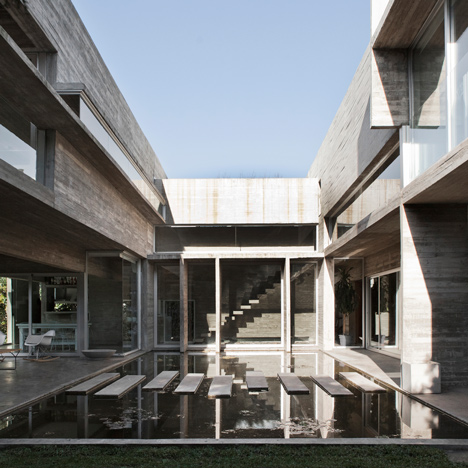 Unable to find a level ground surface, local architects Carlos Viale and Beviglia considered excavating part of the site but were worried about damaging the scenic landscape. They instead chose to float the house above the ground so that it can only be accessed via staircases.

"We appealed to Le Corbusier's idea of lifting the whole volume across the topography, letting the mountain run beneath, and obtaining the flat necessary space artificially through the performance of two slabs – roof and floor – both supported by concrete columns," explained the pair.

"This option generated a more integrated and respectful relation with the hill, establishing a true dialogue between the location and the architectural volume," they added.

Named House in La Rufina, the residence was also adapted to suit the local climate, where temperates typically vary between 18 degrees celsius in winter up to at least 30 in summer.

Chunky slabs of concrete project out beside each of the windows to offer some relief from the sun. Most are positioned at 90 degrees to the walls, but one juts out at an angle to create the illusion that it is a moveable shutter.

"They generate a series of successive shadows that reduce the solar radiation, making it workable to have big surfaces of glass," said the architects.

A total of 10 curved concrete columns lift the structure off the ground – contrasting with what is otherwise an almost entirely rectilinear structure. This is emphasised by overhanging roof planes and several projecting walls.

The main entrance is a straight staircase that leads up into an open-plan living and dining space.

This room can also be accessed from the rear of the house, via a curved concrete pathway that includes a staircase and a ramp.

Three bedrooms run along the front side of the building, where they benefit from the best views, while the kitchen and bathrooms are tucked away at the back.

The raw concrete of the building's exterior continues inside but is contrasted against dark wood finishes for doors, window frames and kitchen worktops.

A cement-based coating was used for the flooring to give it a pale off-white tone.

Underneath the house is a sheltered parking space and an area for laundry.