Architectural studio MAPA has completed Argentina's first Passivhaus-certified residence, a house in the San Fernando Delta that is lifted on stilts to accommodate periodic flooding.

Named House in the Delta, the three-bedroom home on the banks of the Paraná Mini river in the Buenos Aires metropolitan area was raised on a timber structure to protect the interiors from floods.

MAPA, a studio with offices in Uruguay and Brazil, described the home as "an amphibious house – built high above the ground to coexist with the periodic flooding on the banks of the Paraná Mini, an earthy river with a gentle flow".

According to the studio, the main access to the site is via this waterway. "The river functions as a street, square and public space," MAPA explained. "[The] community is building a new concept of urbanity in strict connection with nature."

On the longer side of the house, which faces the water, MAPA included a full-length deck that steps down to the surrounding property.

From this side of the wood-framed building, large glass openings give out onto the covered outdoor space. "A system of ordered balconies controls the sunlight and expands the interior spaces towards the surroundings," said MAPA.

Each of the home's bedrooms thus has immediate access to the outdoors, as does the kitchen, living, and dining room, which are at one end of the rectangular structure.

The gridded framework of the structure is visible on the main facade and was built with laminated pine beams, a process that can create large structural framing pieces with reclaimed or waste lumber. 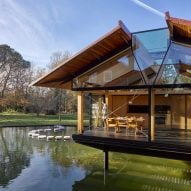 Ten gravity-defying homes that are raised up on stilts

The walls of the house were built of Structural Insulated Panels (SIP), a modular construction material that can offer high levels of insulation and is easily assembled in remote locations.

"The construction, strongly [influenced] by the distance from the means of production of the city, is conceived as a set of prefabricated elements capable of being transported in small boats," explained MAPA.

The project is in final stages of Passivhaus certification. If it is awarded, the project will be the first in Argentina to earn this certification, which recognizes homes built with reduced dependency on artificial heating and cooling.

To meet this certification, MAPA designed an airtight envelope with higher levels of insulation. The studio also took into account the overall footprint of the home, as well as its position relative to the path of the sun.

"The refuge was designed according to a set of passive bioclimatic control strategies, with the aim of consciously inhabiting the landscape," said MAPA.

Other homes in Buenos Aires include an all-white home by Colle-Croce, and a residence by Barrio Villanueva Arquitectos with an impressive cantilever that marks the entrance of the property.

The photography is by Leonardo Finotti.