Owned by Sanrio – a Japanese branding company that specialises in Kawaii, or cute, cartoons – Hello Kitty is a girl character that looks like a white bobtail cat with no mouth, a yellow nose and a red bow by one ear. 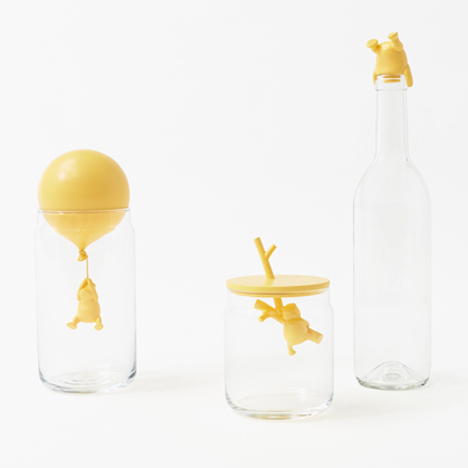 The character features on a vast range of merchandise, with the brand worth an estimated $7 billion (£5 billion).

"Its fan base mainly consisted of women, but due partly to a collaboration with Pen, the men's lifestyle magazine, men's T-shirt designs were required," said Nendo.

"Hello Kitty is a character that has many elements that 'stimulates the right brain' to naturally induce the feeling of 'cuteness'," said the studio. "On this basis we thought up a way to appeal to a new target group by 'stimulating the left brain'."

Radiograph Kitty features an X-ray-style image showing the character's skeleton. Nendo said the image was designed to "shed light to her mysterious internals".

Math Kitty uses numbers and mathematical formulas to create a graphic, with the infinity symbol ∞ also intended to reference the hair bow worn by the cat.

Dictionary Kitty shows extracts from a dictionary with the definitions of hello and kitty. These have been highlighted in yellow, to reference the colour of the character's nose, and pink to allude to the colour of her bow.

Architecture Kitty is "based on the sketches of Le Corbusier, known for his anthropometric 'Modulor' system of proportions," said Nendo.

"When designing architectural spaces, the Kitty Modulor design was made, featuring Kitty raising her right arm and, next to her, five apples to mark her height (Kitty is five apples tall)."

Biology Kitty features an image of Hello Kitty's face made from insects, with a butterfly to represent her bow, a black Japanese rhinoceros beetle and a stag beetle for eyes, and a scarab beetle acting as her nose.

The design for Physics Kitty "serves as a reference for Kitty's height as equal to five apples, which are placed next to a scale," said Nendo, while Art Kitty is shown as a Mondrian-esque print of blocks in primary colours. "One can somehow strangely discern Kitty's face due to her distinctive colours," explained the studio.

Evolution Kitty is intended as a reference to the character's subtle design evolution over the past 40 years.

"Since her debut in 1974, Hello Kitty has been subtly evolving through the years, incorporating design trends concerning her contours, three-dimensionality and facial features," said Nendo.

"The design draws attention to Kitty's continuous evolution, by superimposing her on the classic illustration depicting human evolution."

The T-shirts are not yet available for purchase.

It is not the first time that Nendo has tackled cartoon character design. The firm, founded by designer Oki Sato, has previously worked with the Disney corporation and last year produced a set of furniture based on the shape of characters from Winnie-the-Pooh, followed by a glassware collection.

The design studio has turned its hand to an increasingly wide range of products over the past year, adding sunglasses, shoes, watches, chocolates, ice-cream cakes and umbrellas to its diverse portfolio. It has also continued to produce furniture and interior designs, recently completing its latest store for Spanish shoe brand Camper.