Oklahoma firm Kinslow, Keith & Todd has presented its vision to build a skyscraper shaped like a tornado on top of a Tulsa parking garage.

The towering structure, proposed within the region known as Tornado Alley, is designed to include a museum dedicated to weather, a storm research centre, a revolving rooftop bar and restaurant, and a grassy roof. 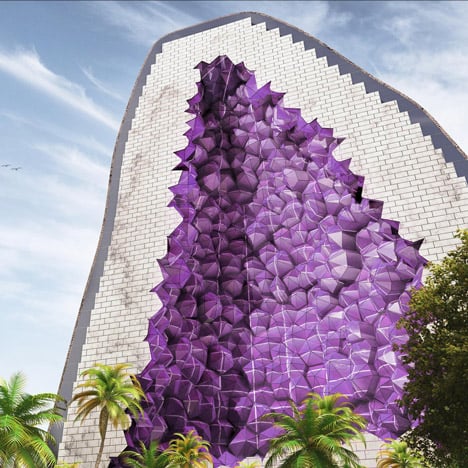 Lighting would also be added so that the whole building would appear to be slowly spinning to passing drivers.

Kinslow, Keith & Todd came up with the design after being asked by Tulsa People magazine for explore ways to rejuvenate the downtown area of the US city.

"The concept started as a way to get a revolving restaurant up high enough to have great sight lines of downtown, the Arkansas River, and the Osage hills," explained studio co-founder Andrew Kinslow.

"As we worked on ways to make it more interesting than just a stick with a round restaurant on top, the swirling of a tornado concept was born."

Conceived with a height of between 75 and 90 metres, the tower would be built on top of a two-storey 1920s-era warehouse, believed to have once housed trucking and vending companies. This location is a convenient distance from two local tourist attractions – the BOK Center and Cox Business Center.

Known as the Oklahoma Weather Museum & Research Center, the building could also include a training centre for storm chasers – researchers who follow tornados – as well as a broadcast station and cameras for local TV channels and weather reporters.

The exterior would be a mixture of glass and perforated metal, and the planted roof is envisioned as a garden of native Oklahoma grasses and plants.

The architects don't currently have a client for the project, but have been approached by several developers keen to add houses and offices into the design. They hope to collaborate with science and technology consultant Kerry Joels, who has also been exploring the idea of a weather museum in Oklahoma.

"Since the original article was published in Tulsa People magazine there has been a tremendous amount of activity," added Kinslow. "Who knows what tomorrow will bring."